A Rough Guide To Rigging Shamrock

During the last couple of weeks Shamrock has been rigged ready for visitors.

The first step is to hunt the boat shed for, ropes, pulleys, shackles, sails and various other bit's and pieces needed during the process. This usually end's up in a big pile on the boat shed floor. The mizzen mast is also lowered from the roof, manhandled to the dock side and then aboard.

Meanwhile a small temporary mast has been lashed to the main mast tabernacle (the bit that supports the mast) with a pulley attached to the top and rigged ready to raise the mizzen. 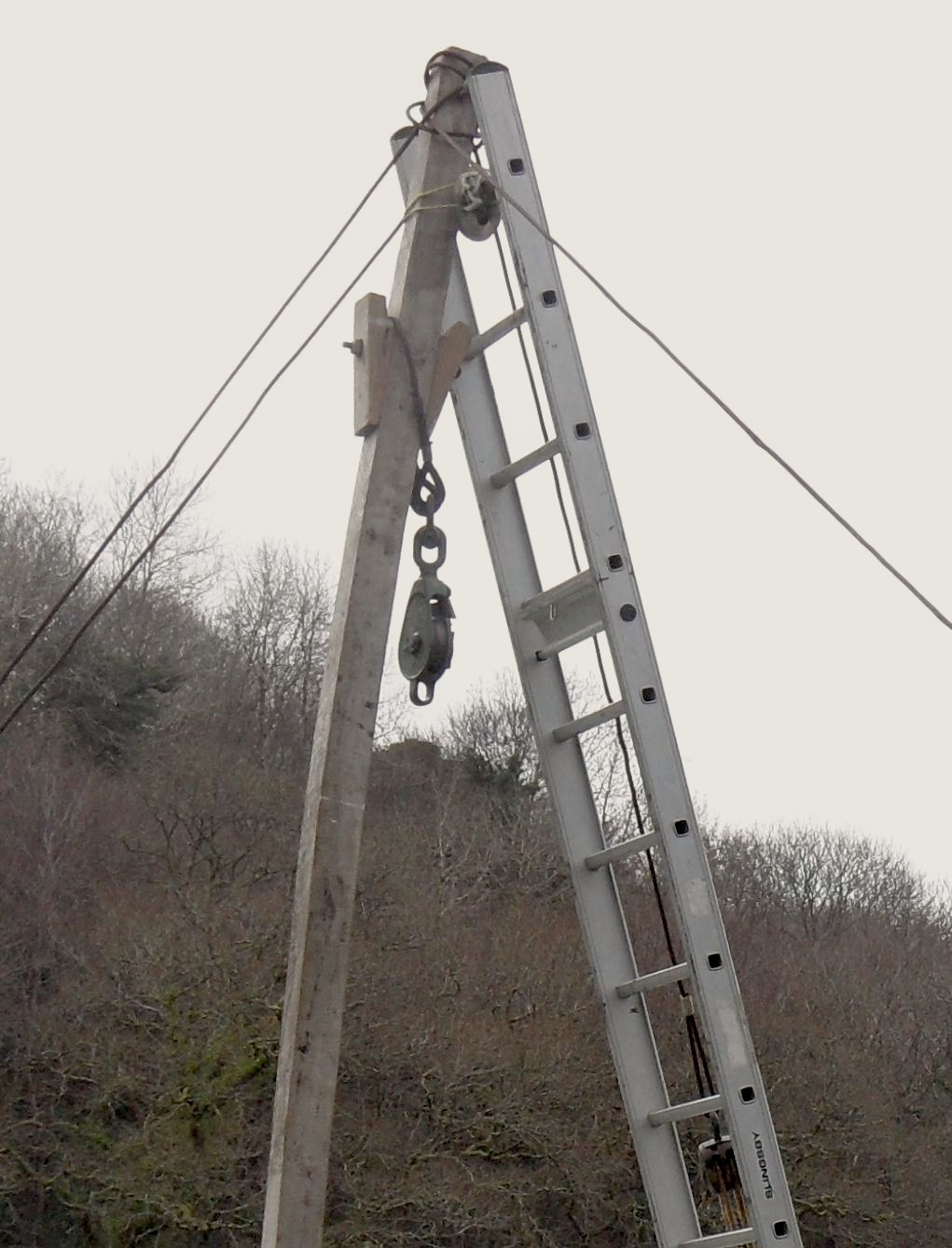 Two of the mizzen shrouds (wires that steady the mast) are attached to the mizzen and onto the bulwarks, via a system of ropes and pulleys. These are used to steady the mast during the lifting process. With the use of the deck winch the mizzen is stepped (raise and set the mast in place) and locked into place. The remaining shrouds are then fitted, the mast adjusted and the temporary mast removed. 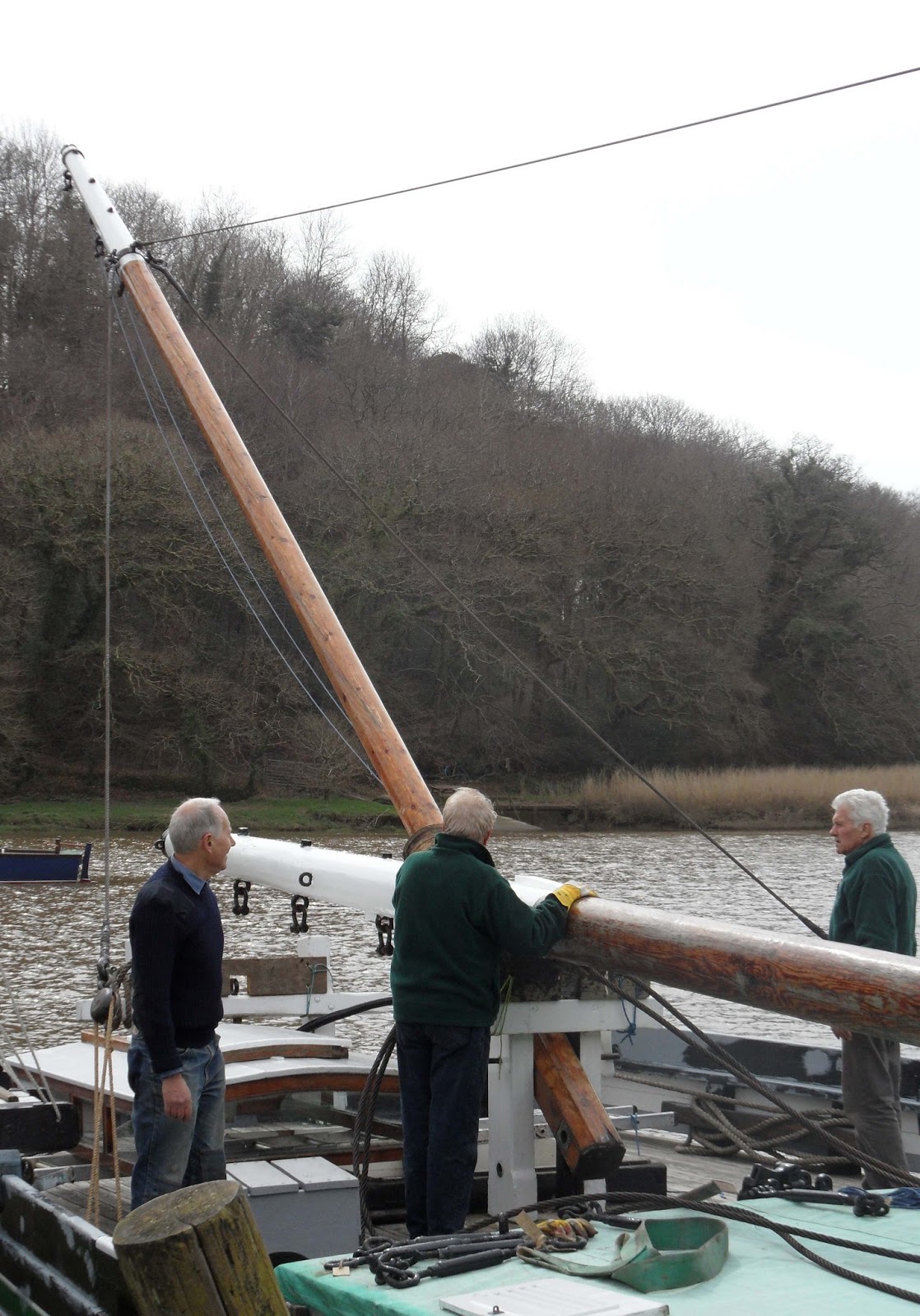 The main mast is prepared for stepping with the fitting of all the stay wires and two lifting lines, the first being through a pulley attached to the mizzen and then onto the deck winch. This will make the initial lift. The second is a line attached to the top of the mast and then through a block, attached to the bow, and finally back to the anchor windlass. This is used for the final part of the lift and to hold the mast while the first lifting line is repositioned during the first part of the lift. While the mast is being lifted care needs to be taken to ensure the main mast doesn’t foul the mizzen. Once the lift is completed and the mast locked in place the shrouds are attached and adjusted to ensure that both masts are inline.

Next dress the masts with the rigging blocks; these blocks are then reeved (threaded), with the right bits of rope. The main mast needs to be done in order from the top down; this is completed using a Bosun’s chair. Note the high tech method used to ensure we send up the blocks in the correct order! 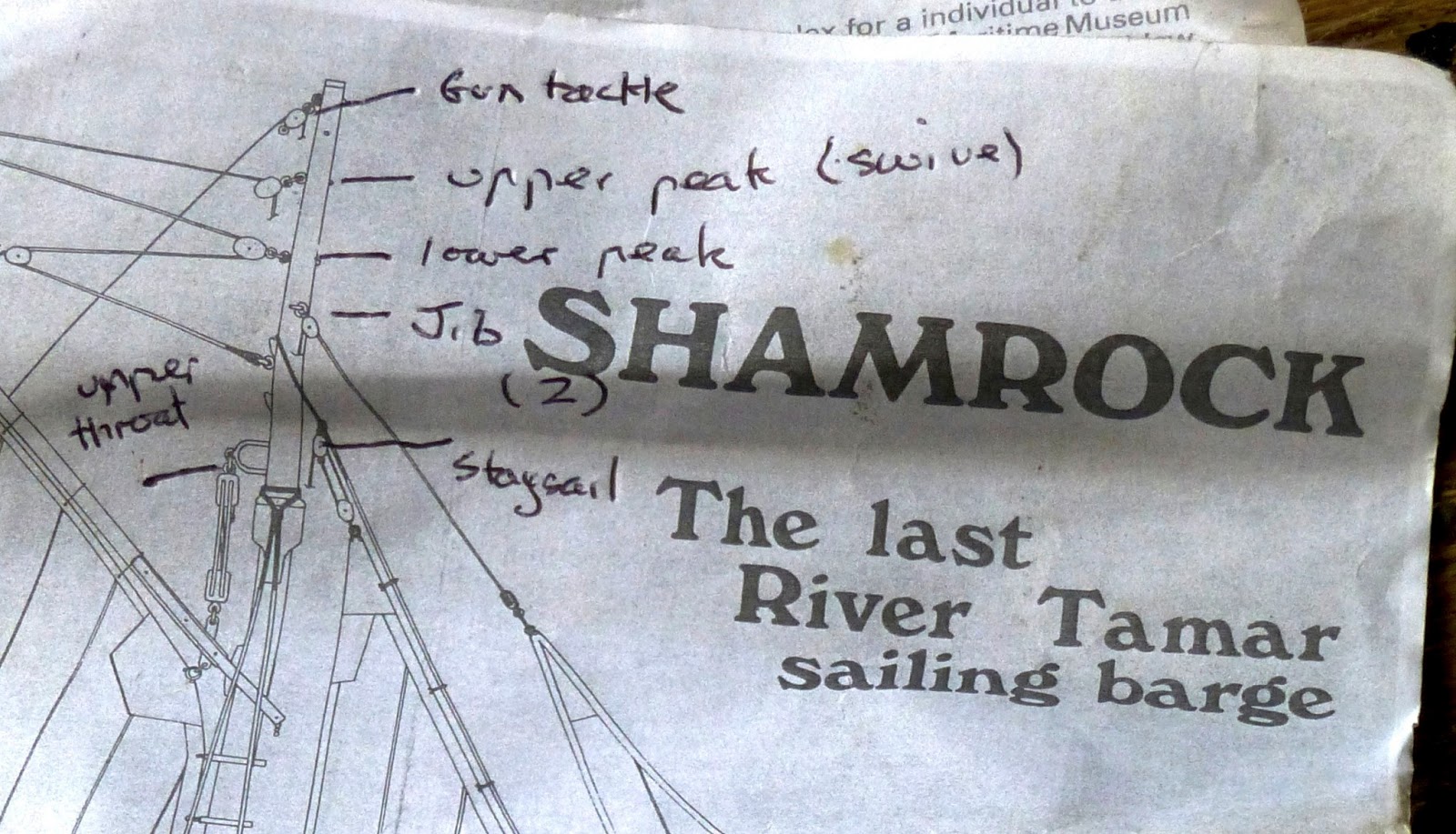 These are recovered from the boat shed with the booms and gaffs fitted first. This also requires a lot more reeving of blocks. Next is the bending (attaching) of the main and mizen sails which are usually given a bit of airing before being lowered, folded and lashed onto there respective boom. Finally the sail covers are fitted.

Attach Shamrocks lifebelts to the mizzen mast shrouds, attach the navigation light boxes to the main mast shrouds. Fit the bowsprit (pointy bit that sticks out the front), oops wrong way up, fouls the anchor windlass, remove and refit the correct way up. 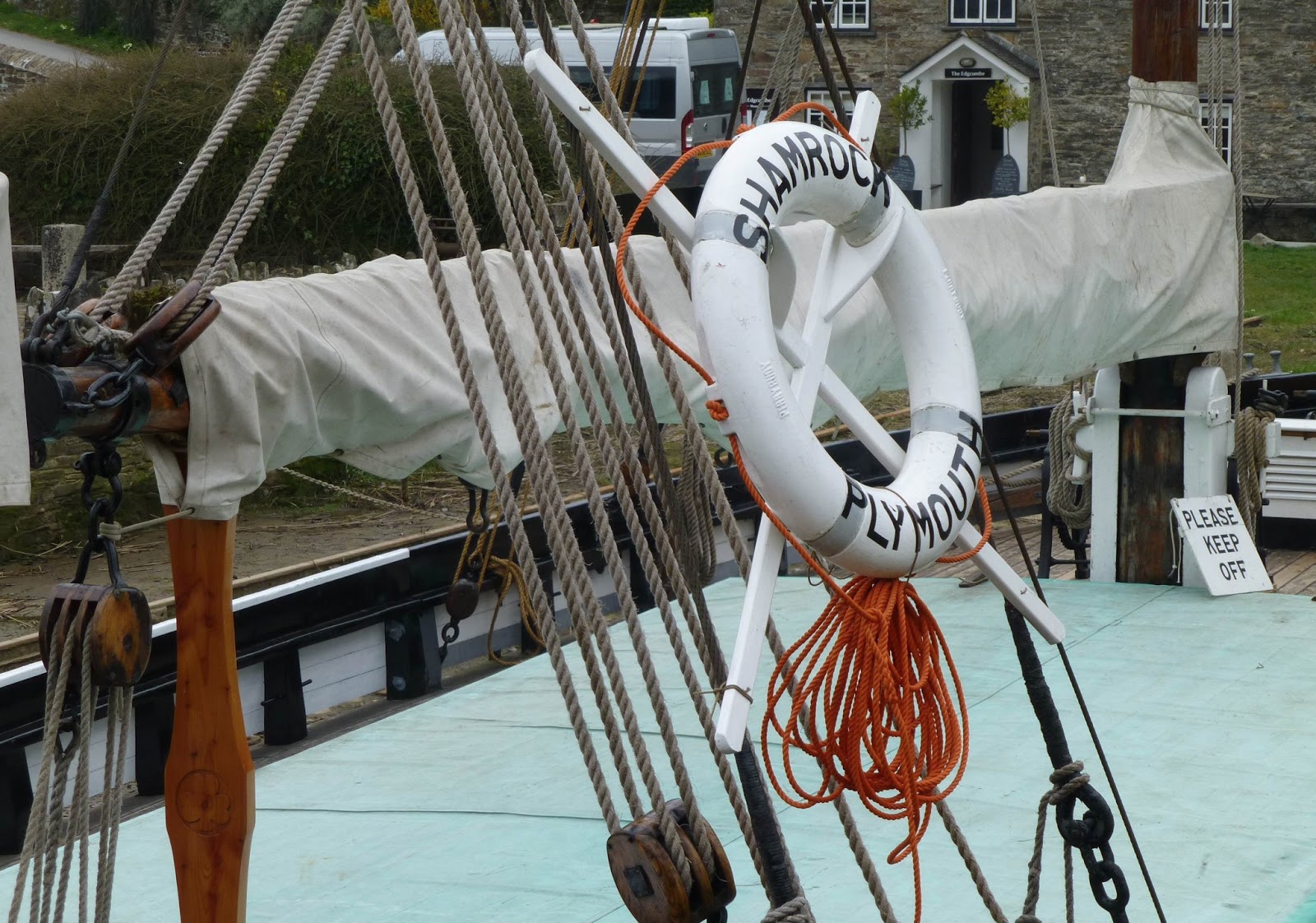 The staysail and jib still need to be attached before Shamrock is completely rigged.

Want to visit Shamrock at different locations, see her on the river? Then check out the updated "Shamrock Events" page for where and when.
Posted by Shamrocks Crew at 22:38 No comments:

THE JOYS OF “SHAMROCK” VOLUNTEERING 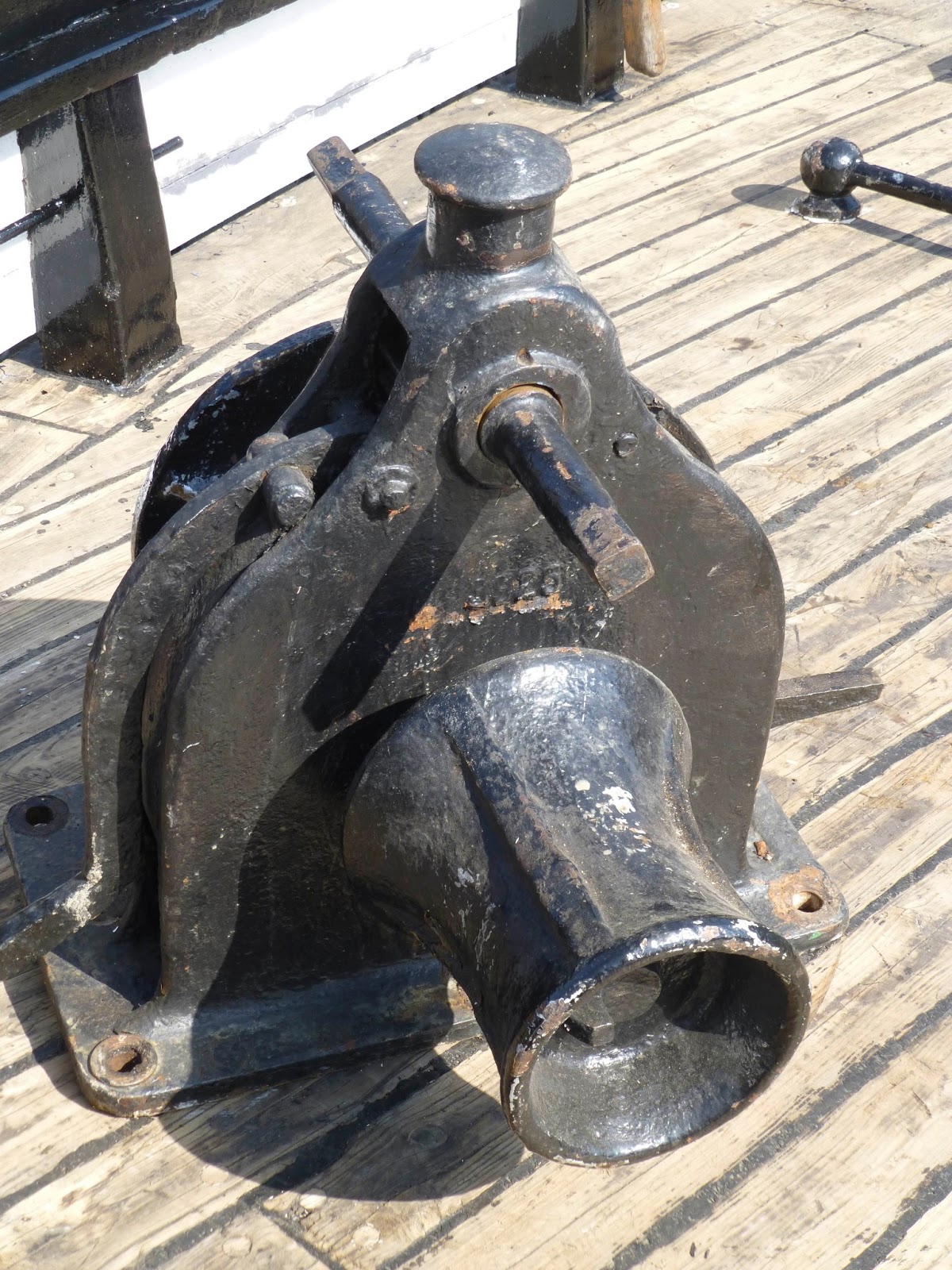 Hallelujah, the foredeck anchor windlass has been shipped and bolted in place.

It really requires a midget with the strength of a Goliath (wearing steel toe cap shoes) to move the thing.  We have a Goliath in the shape of one Shaune Blight (the skipper) but the nearest we could find for a midget, actually he drew the short straw, was yours truly!

To fit the monster entails first of all manoeuvring it into position over the holes in the deck and on to its wooden deck supports (that’s where the toe caps come in, to drop the thing on to a foot would seriously hurt!)  Next step, crawl into the forepeak, one shoulder at a time, turning around when half in and then twisting on to ones back drawing the other shoulder and leg in at the same time.  Now lay under the bolt holes in the deckhead and insert bolts whilst trying to fit washers and nuts, all the time having mastic dripping on ones head from above.  All of this process by the way being conducted in the pitch dark.

Next manoeuvre, swap spanners as the first one did not fit in some of the recesses in the deck beam.  To avoid having to extricate ones whole body a right arm could, with difficulty, just reach a spanner handed down the companionway from above.

The mission was eventually accomplished after a certain amount of bloodshed and now that this large piece of “ironwork” is in place, it will, hopefully, not need to be removed for several years.

Anon.
Posted by Shamrocks Crew at 22:20 No comments: