On the 20th April the first Swallow of the year was spotted flying over the river and was soon followed by the call of a Cuckoo the first one to be heard at Cotehele Quay for a couple of years.

Shamrock's wire main mast shrouds have now received a coating of Shaune's mixture of roofing bitumen and linseed oil, only the forestay left to do. Both masts have been dressed, rigging blocks reeved, the bowsprit fitted along with the main and mizzen booms and gaffs. The one item that did cause a bit of a delay was working out how to reeve the mainsheet. Once the sails are bent on and the anchor and its chain stowed, Shamrock will look how she normally appears in many a summer visitor’s photo.

Posted by Shamrocks Crew at 21:55 No comments:

After the addition of a few final decorative pieces Nancy Belle has been floated off the slipway, taken on a shakedown trip to Calstock and finally secured to her river mooring where she belongs. She is now ready to commence her river trips at the end of the month. 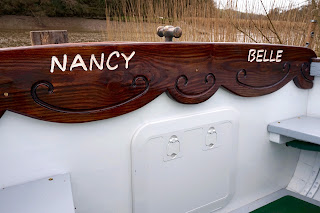 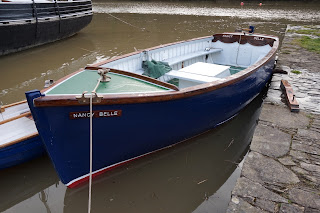 The first approximately 4.5 meters (15 ft) of Shamrock's anchor chain has been painted white to let the crew know when the anchor is about to reappear when being raised. Dropping and the subsequent raising of Shamrock's 72.5 kilogram (160 lb) Fisherman type anchor is something to be avoided if possible. 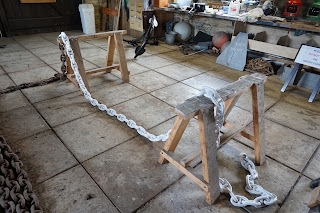 Saturday 30th April from 11:00 onwards is confirmed as the time and date to celebrate the handover of Shamrock's shares held by the National Maritime Museum to the National Trust. There will be a number of different things such as flag making for the children along with a treasure hunt, a display of where Shamrock has been throughout her life along with pictures and other information, a guided walk around the quay and lime kilns and a walk/talk (about the river) from Calstock to Cotehele.
Posted by Shamrocks Crew at 21:30 No comments:

After her extensive winter refit Nancy Belle has finally been moved out of the boat shed onto the slipway. With a garden hose temporarily rigged to the water cooling inlet her engine has been run up and left running for about half an hour while checks where carried out for any water or fuel leaks or any problems with the engine. On completion of these checks the hose was moved to Nancy Belle's bilge and left running soaking the hull planks allowing them to expand taking up some of the gaps that had appeared due to her drying out during her refit. Buy the time she is floated off most of the hull should be watertight reducing the amount of work the bilge pump will need to do during her first couple of weeks afloat.

Some of the extra floor space created by the removal of Nancy Belle has been allocated for Shamrock's spars once they are lowered from there storage rack. Shamrock's navigation light boxes and navigation lights have also received some attention from the crew and are ready to be installed.

Posted by Shamrocks Crew at 20:48 No comments: