Shamrock's frame repairs are progressing with a couple of frames only requiring a final fettling and preserving before the new beamshelf and hull planks can be fitted. While this is progressing the crew has made a start on renewing the main deck caulking with the removal of some of the existing caulking.

The planks cut from three European larch trees have arrived from Scotland and have joined the oak planks stacked and drying out in the now congested boat shed. The majority of the larch will be used for her hull planks. Shamrock's temporary working cover has been raised allowing for easer access and less cramped working conditions.

Posted by Shamrocks Crew at 21:30 No comments:

Shamrock's repairs are continuing with the ‘aftermost’ section of her starboard beamshelf being cut and shaped as well as bungs of various sizes being produced ready to stopper any old nail holes. Timber has started to arrive with 32ft (10m) planks of freshly cut oak along with slabs of seasoned oak for repairing Shamrock's frames and the production of bulwark stanchions. A start has been made on her frames with two sections being cut and shaped. The newly arrived oak planks have been moved into the boat shed and stacked for drying. This was completed using a combination of ancient and new technology, (logs and a powered grab). In preparation for any winter storms a new covering frame has been fabricated and placed on Shamrock with some stronger tarpaulins to provide cover.

As well as ongoing repairs to Shamrock other jobs are also continuing at Cotehele quay with new quayside ladders being constructed. These are to replace the old condemned ladders that have already been removed due to their unsafe (rotten) condition. In one instance a broken rung  caused a “mud angel” to appear. (Similar to those that can be formed in snow).The river has been cleared of all of our other boats with Nancy Belle being hauled up the boat shed slipway, cleaned and covered. The ‘Edgcumbe’, Shamrock's workboat and the pram dingy being moved to the boat yard and covered.

*”Mud angel” - the imprint left by a person falling in the mud.

Posted by Shamrocks Crew at 16:41 No comments:

Shamrock with her hanging knees removed, missing starboard hull planks, covering boards, bulwark and sections of the beamshelf, she is beginning to look a bit scruffy and the pile of old timber is getting larger. The beamshelf is a line of thick timbers scarfed together and bolted to the upper futtock and top timbers of the frames to form a hoop inside the hull for the beams to rest on and gives Shamrock strength to keep her shape. As such the beamshelf needs to be renewed first. Four year old cut and seasoned, European larch is being used starting with the after section. Once it has been cut to size, shaped and steamed into shape it is ready to be preserved before being fitted. Her frames are being cleaned and having the old hull planking nails removed ready for the fitting of new planks. The crew is wondering just how much more of Shamrock is going to disappear?

Posted by Shamrocks Crew at 21:03 No comments:

With the arrival of Penryn shipwright Adrian Grigg (Shuggs), plus his assistant Josh Flatt, a start has been made on Shamrock's repairs, all the rotten starboard side hull planks have been removed along with a section of the bulwark. Bob Medler of R&J Maritime Ltd has also completed a survey of Shamrock's condition. The news is not all bad as apart from the already known hull planks and false keel the extras found so far are the starboard side beamshelf, a section of covering board* and some bulwark stanchions. A few of her main frames will also need sections of rot removed and “new wood” scarf jointed into place.

* COVERING BOARD The outermost deck plank which covers the timber heads of the frames.

Posted by Shamrocks Crew at 22:26 No comments:

Cotehele Quay Friday morning and Shamrock is floating on the tide, her mooring ropes are released and she is floated over to the rear of her cradle and then hauled forwards towards her correct position over her cradle only for some reason she stops about 2 meters (6ft) short and even with Nancy Belle pushing she will not move. As the tide is starting to drop the decision is made to try and get her back over to her mud dock, this also fails. So as the tide is falling fast Shamrock is allowed to settle on her cradle where she is. Once the tide drops it is noticed that steel band that protects the stempost (bow) and continues around the stempost curve and along the bottom of the keel for about 1 metre (3 ft), had become detached on the keel section and was acting like a large hook. This had originally stopped Shamrock clearing the top section of her cradle and also stopped her being pulled back off. As the Shamrock keel is ether hidden in the mud at low tide or floating in the muddy waters of the Tamar this had gone unnoticed. Later that day the offending section of steel band was cut off and Shamrock's sternpost shored up to prevent her stern sagging. The Friday evening tide was higher than the earlier one and Shamrock was finally floated onto her correct position over her cradle. Then, around midday on Saturday, with the aid of a tractor she was hauled to her position at the top of the slipway ready for her much needed repairs.

Posted by Shamrocks Crew at 20:17 No comments:

With Shamrock's planned haul out day rapidly approaching the crew has been busy lowering both masts, removing the rudder and other items no longer required. Although the main mast is lowered and ready to be offloaded mechanical assistance is required to complete this task. 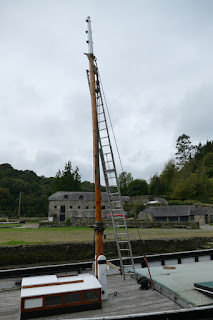 Mizzen mast rigged ready to assist in the lowering of the main mast. 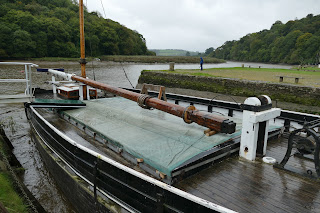 Main mast lowered and removed from its tabernacle. 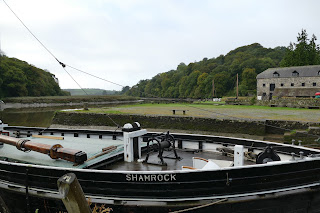 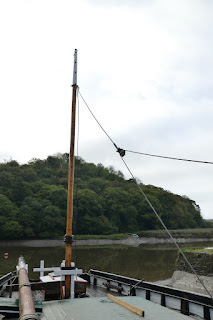 Taking up the slack. 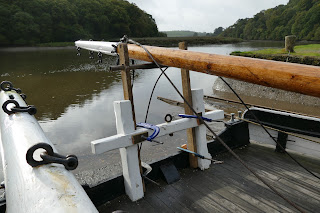 Mizzen mast lowered and resting on a temporary roller. 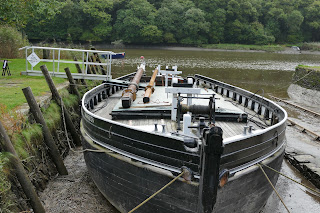 Both masts ready for offloading. 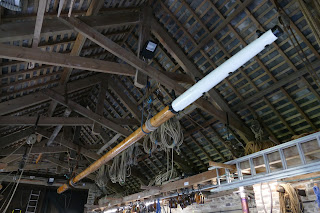 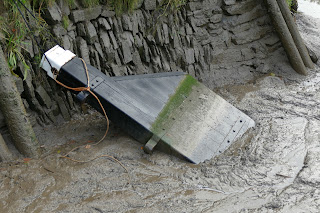 Rudder ready to be hauled out on the next spring tide.
Posted by Shamrocks Crew at 19:24 No comments:

Despite the best efforts of the changeable weather, Sunday nights 'Songs for Shamrock' went ahead and proved to be a great success thanks to the ‘Polperro Fishermen's Choir’ and ‘Mike & Tilly Music’ for the interval music. Shamrock was dressed ready to be used as the stage for the singers but, due to the heavy showers, the venue was moved to Shamrock's boat shed. The estimated attendance of 100 plus managed to squeeze into the shed and the evening raised over £1,400 towards Shamrock's upkeep. A heartfelt “Thank you” to everyone who attended.

Posted by Shamrocks Crew at 20:03 No comments:

It's Been A Quiet Week!

Posted by Shamrocks Crew at 20:34 No comments:

Email ThisBlogThis!Share to TwitterShare to FacebookShare to Pinterest
Labels: Shamrock

After consulting the tide time tables the spring tide of Friday 6th October has been pencilled in as Shamrock's haul out day. This will allow time for the slipway track to be completed with the last two sections needing to be cut to their respective sizes and laid. Once completed Shamrock's cradle can be moved to the bottom of the slipway track to check it rolls freely and gauge the minimum tide height required to float Shamrock onto the cradle. The amount of silt that the river Tamar deposits on the slipway also means that it will need to be cleaned at least twice more before haul out day, once before laying the final sections of track and the day before haul out. Both of Shamrock's masts are also scheduled to be lowered and removed before the move.

Posted by Shamrocks Crew at 17:16 No comments:

Email ThisBlogThis!Share to TwitterShare to FacebookShare to Pinterest
Labels: Haul out, Shamrock

While the crew has been waiting for the tide to be right to finish laying the slipway track, the time has been used to collect the various sections of Shamrock's cradle from Cotehele Quay boat yard and place them at the top of the slipway track. Next came the Chinese puzzle of assembling the cradle and it was discovered that the weld numbers on the various sections are not in order, but assembly was achieved successfully. The cradles old base timbers, which where rotten, have been renewed, levelled off and finally topped off with old railway sleepers on which Shamrock will sit when she is hauled out. So much for August being a quiet month!


Posted by Shamrocks Crew at 19:49 No comments: