The weekend spent at the Sutton Harbour Plymouth Classic Rally 2013 was a great success with lots of interesting visitors.

Had Spotlight (the local BBC news program) filming for a feature on the evening's program, also the weather forecast was transmitted live from Shamrock's deck overlooking Gipsy Moth IV.

Shamrock's sails had been soaked by Wednesday night's heavy rain, so the theory that a crew of two (man and boy) could set and strike her sails was put to the test and proved possible. While they were drying the view from the quay was dominated by Shamrock's sails. 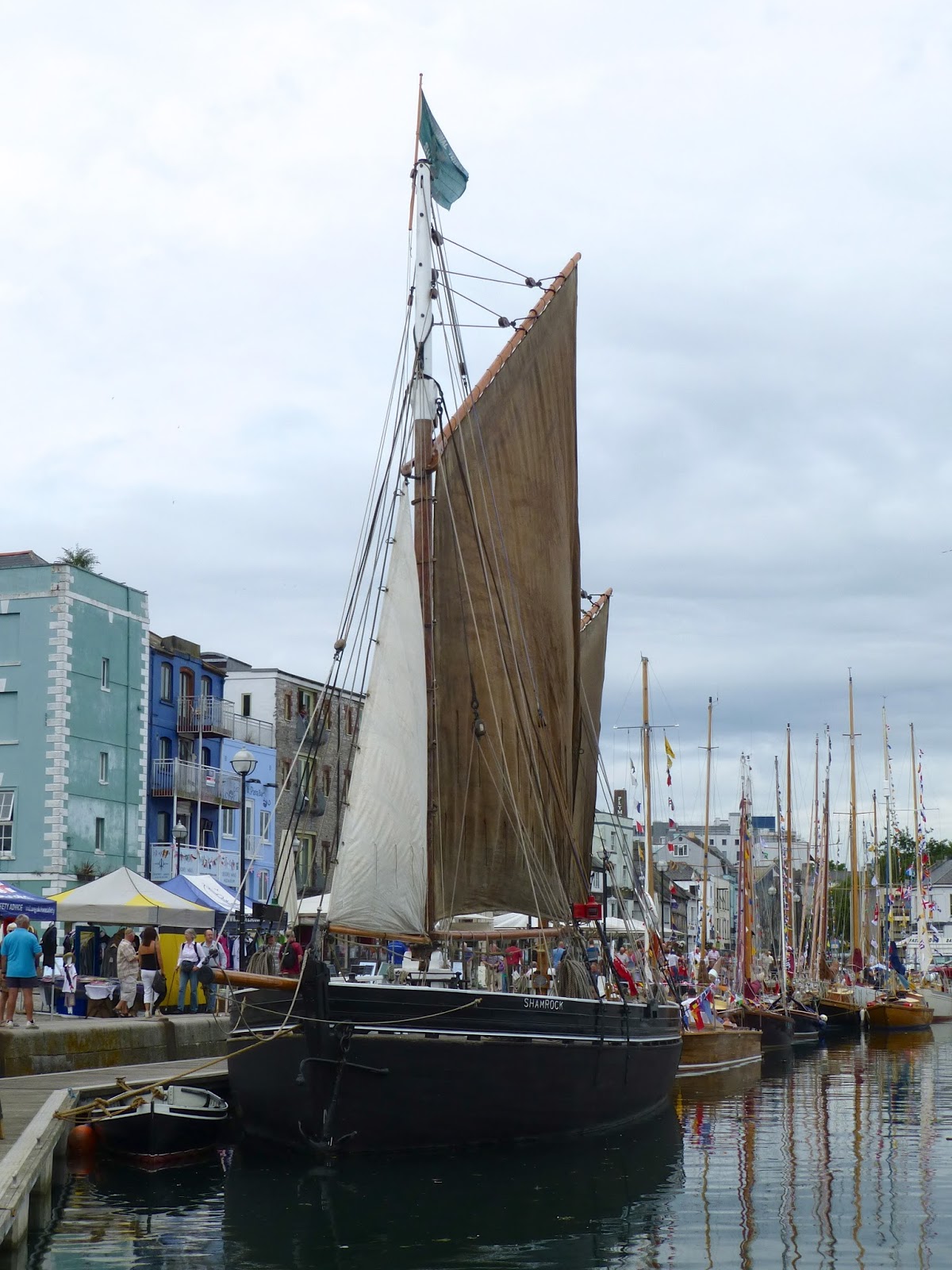 Shaune also drew a bit of an audience while he eye spliced some ropes for for one of the other boat owners.

Whilst I was meeting and greeting, Mr Fildew’s daughter and her two sons came aboard. (He raised her from Hooe Lake in a derelict state and planned to restore her but later sold her to NT for £1.00.)  After a long, helpful chat whilst the boys thoroughly enjoyed exploring their grandfather’s boat, we planned to meet up and fill in some of the gaps in the archives. They may like a trip downriver sometime.

Monday (Give us a lift)

With an early start Shamrock, being towed by Nancy Belle, cleared Sutton Harbours lock gates by eight for the return trip to Cotehele. With a freshening wind and squally showers Nancy Belle relinquished the tow to Little Charly, a Clyde Puffer designed motor sailer, in a prearranged manoeuvre while crossing Plymouth Sound. This resulted in the trip being completed in record time while averaging a speed of 5 knots. 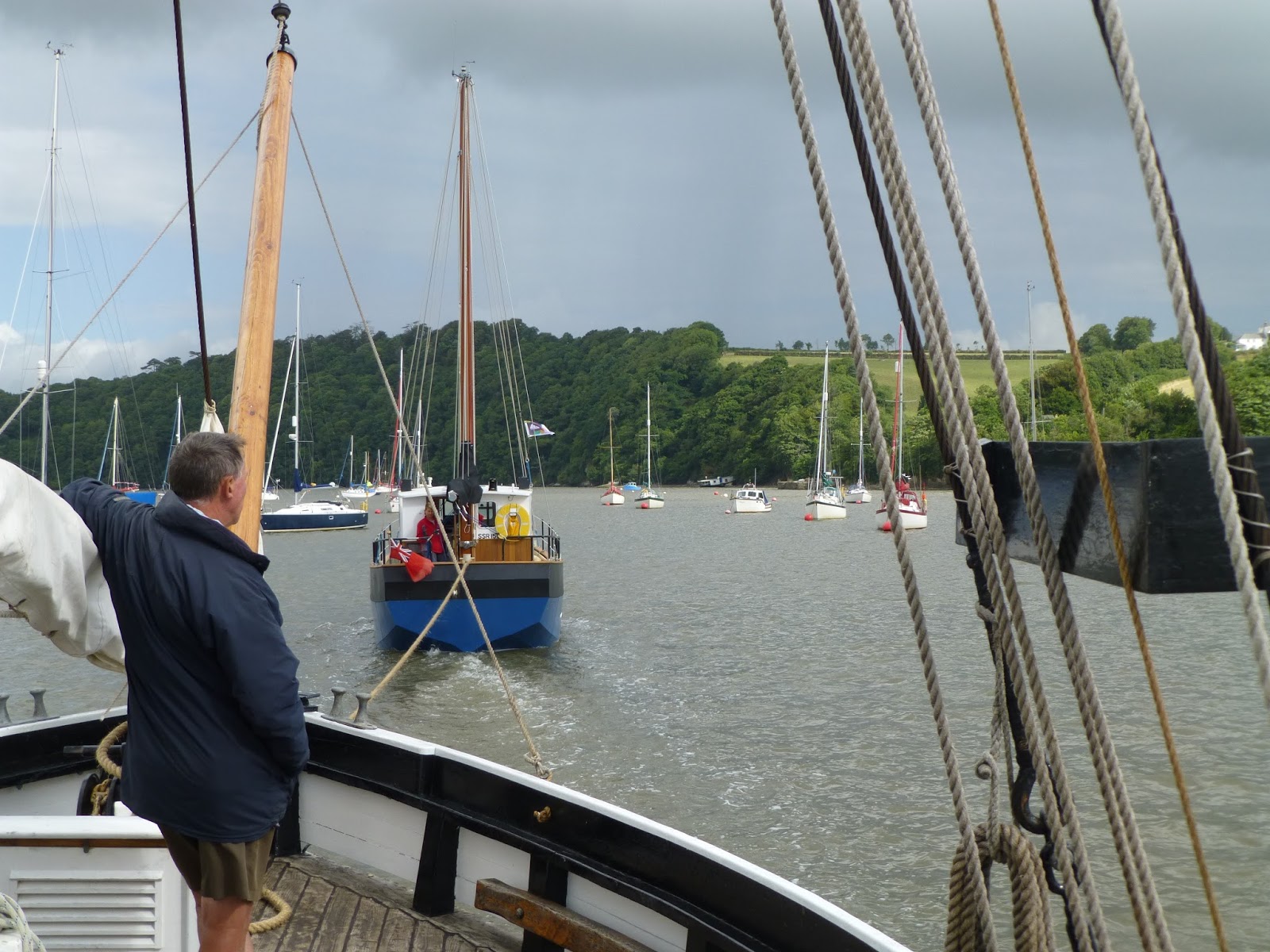 Just before arriving at the quay the tow was released, Nancy Belle secured to the stern ready to push and pull Shamrock alongside. She was secured alongside just as a heavy rain shower arrived so the crew disapeared into the boat shed for a quick cup of tea while it blew over. 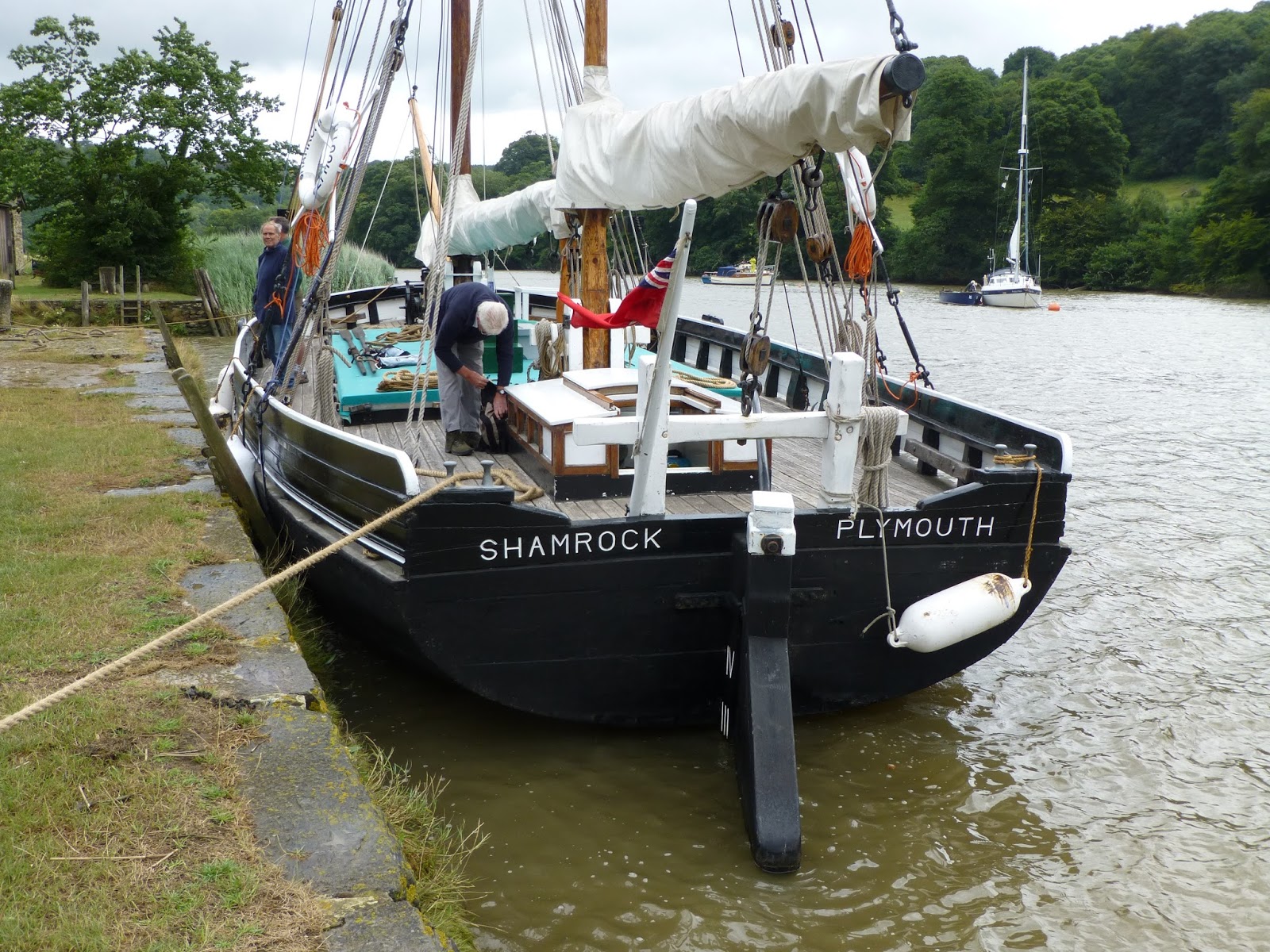 With the crew suitably refreshed, Shamrock was then roped warped along the quay into her dock, secured and unloaded.

Posted by Shamrocks Crew at 19:41 No comments:

After a quick trip across Plymouth Sound, Shamrock is now safely berthed in Sutton Harbour ready for the Classic Boat Rally. 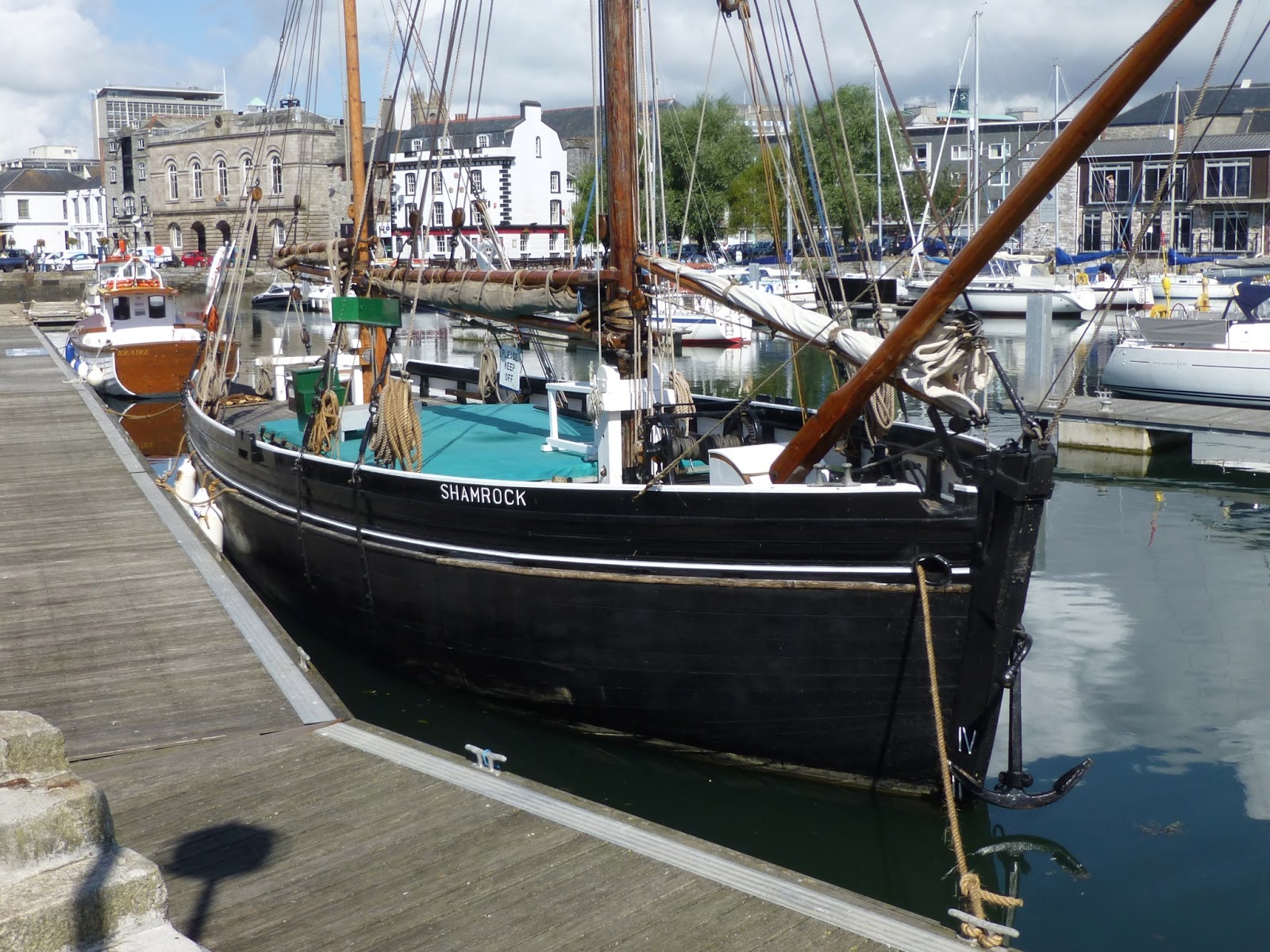 As we are entering a period of low neap tides Shamrock will be returning to Cotehele Quay on Monday the 29th's morning tide, the last day of the rally. This is to ensure that there is sufficient water at Cotehele to enable her to dock on arrival. She is due to leave Sutton Harbour at 07:15 (another earlier start) and should arrive at Cotehele Quay about 11:30.

What's the result of a few weeks of sunshine followed by a night of heavy rain? Answer, lots of water in Shamrocks bilges.
On opening up Shamrock this morning one of the bottom boards was found to be floating, no electric pump so back to the scoop and bucket. About 100 bucketfuls!! So much for the gentle cruise.

Posted by Shamrocks Crew at 16:54 No comments:

Shamrock is due to leave Royal William Yard at 08:00 on Thursday 25th for her trip across Plymouth sound. She is scheduled to enter Sutton Harbour by 09:30 ready for the weekends Plymouth Classic Boat Rally.
Posted by Shamrocks Crew at 20:47 No comments:

Today Shamrock left Cotehele Quay, as scheduled, for a gentle cruise to Royal William Yard (RWY) Plymouth, where she is now berthed. The trip took longer than normal due to a brisk headwind. She will be open for visitors on the 20th and 21st June.


Lining up to enter RWY 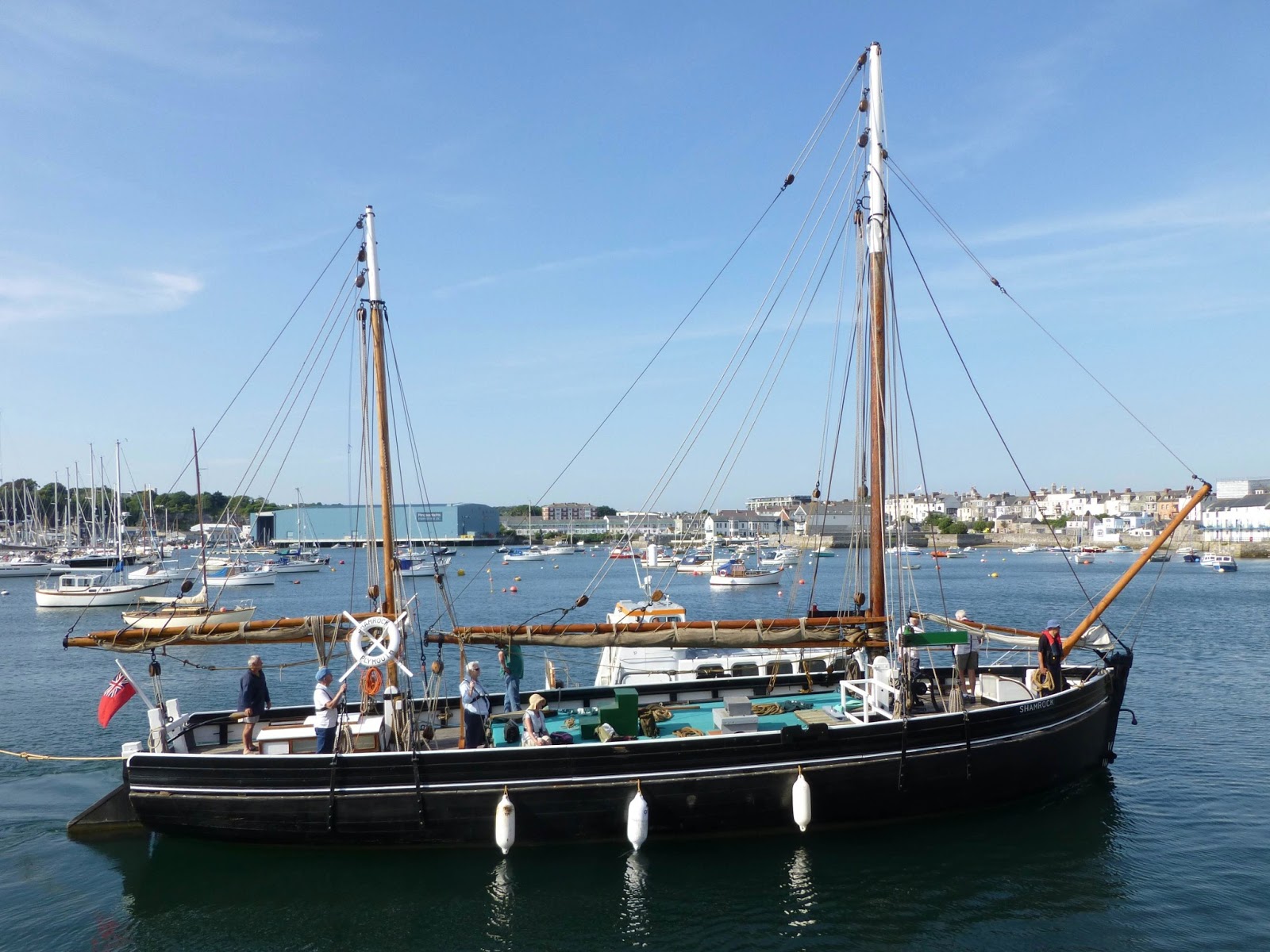 Random life jacket test! How did that happen? 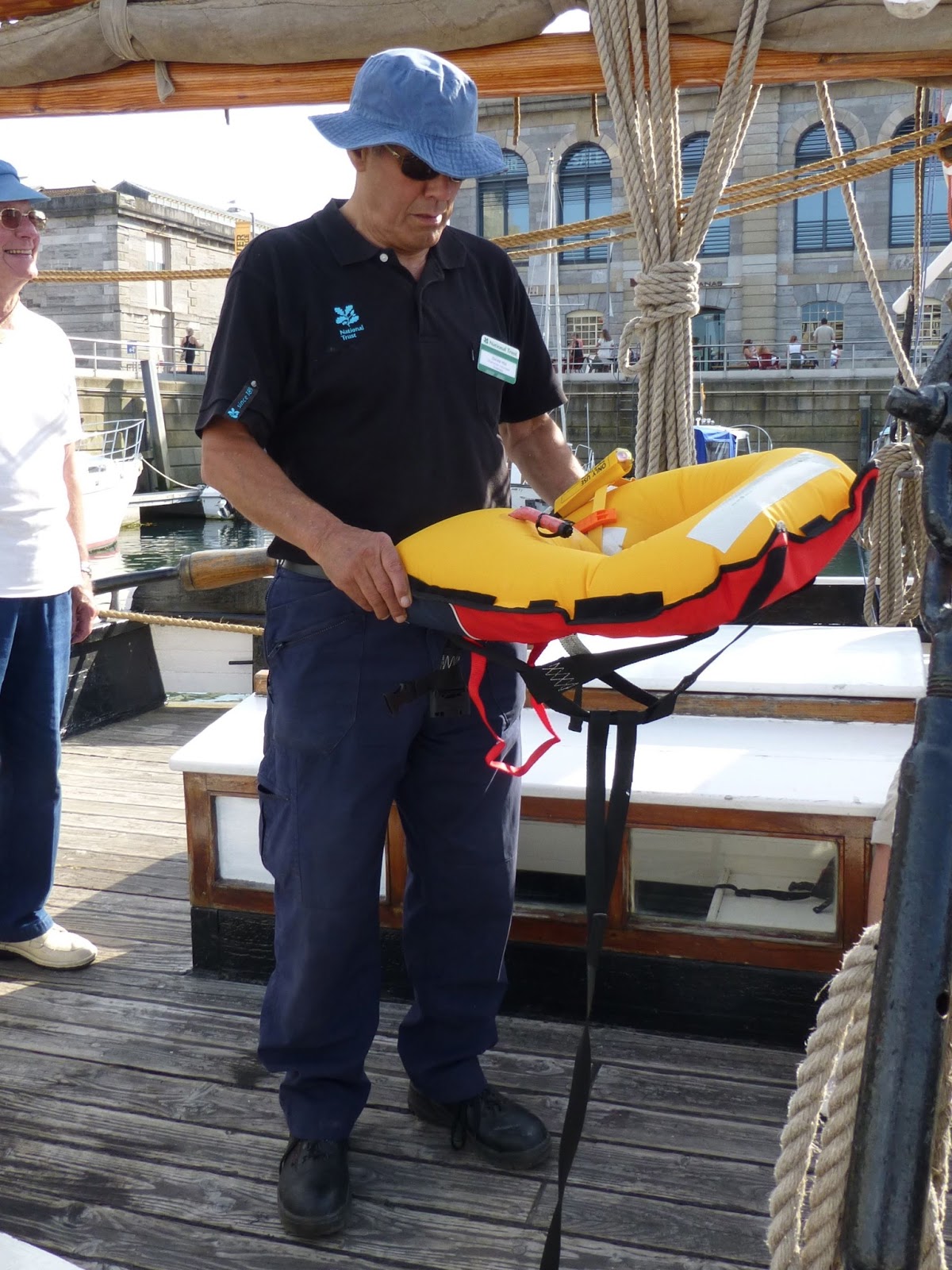 The plan is to remain in RWY until Wednesday 24th, then proceed across Plymouth sound to Sutton Harbour (the Barbican), in preparation for the Plymouth Classic Boat Rally, July 26th to 30th.

Shamrocks return trip to Cotehele is scheduled for Monday 29th July. Times of the move and return journey will be published here when known.

Posted by Shamrocks Crew at 22:54 No comments:

Is it a restoration or is it a repair?

Repairs to the Rob Roy sailing canoe's hull have started and over the last few weeks Shaune has replaced or repaired any broken ribs and beams using left over oak from the restoration of Shamrock's work boat. 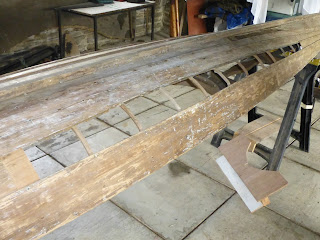 The original plan was to replace any broken or split planks. On closer inspection it was found that to replace all the affected planks would entail completely rebuilding the canoe, which could easily result in the loss of its present shape. Also the planks are made of pitch pine which is hard to come by and can be very expensive. The use of pitch pine helps explain how she managed survive the 30 years or more exposed to the elements.

Plan B is to replace the one broken section of plank (done), tape up the split planks on the outer hull and then apply a layer of glass-reinforced plastic (GRP) on the inner hull. (GRP!! Gasps of horror from the purists.) By using GRP the majority of the hull will be the original timber and keep its original shape. More importantly it should be watertight as the intention is to sail the canoe on completion. Future maintenance will also be easer as drying out won't be such a problem.

To replace the missing section of plank a small amount of pitch pine was acquired, but this was not long enough. To overcome this two lengths have been scarfed together, shaped and then steamed into place. 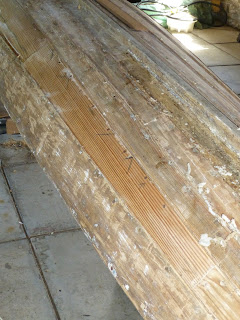 Currently Shaune has turned his attention to renewing the stem post as the original disintegrated when the large screws, used in a previous repair, were removed. 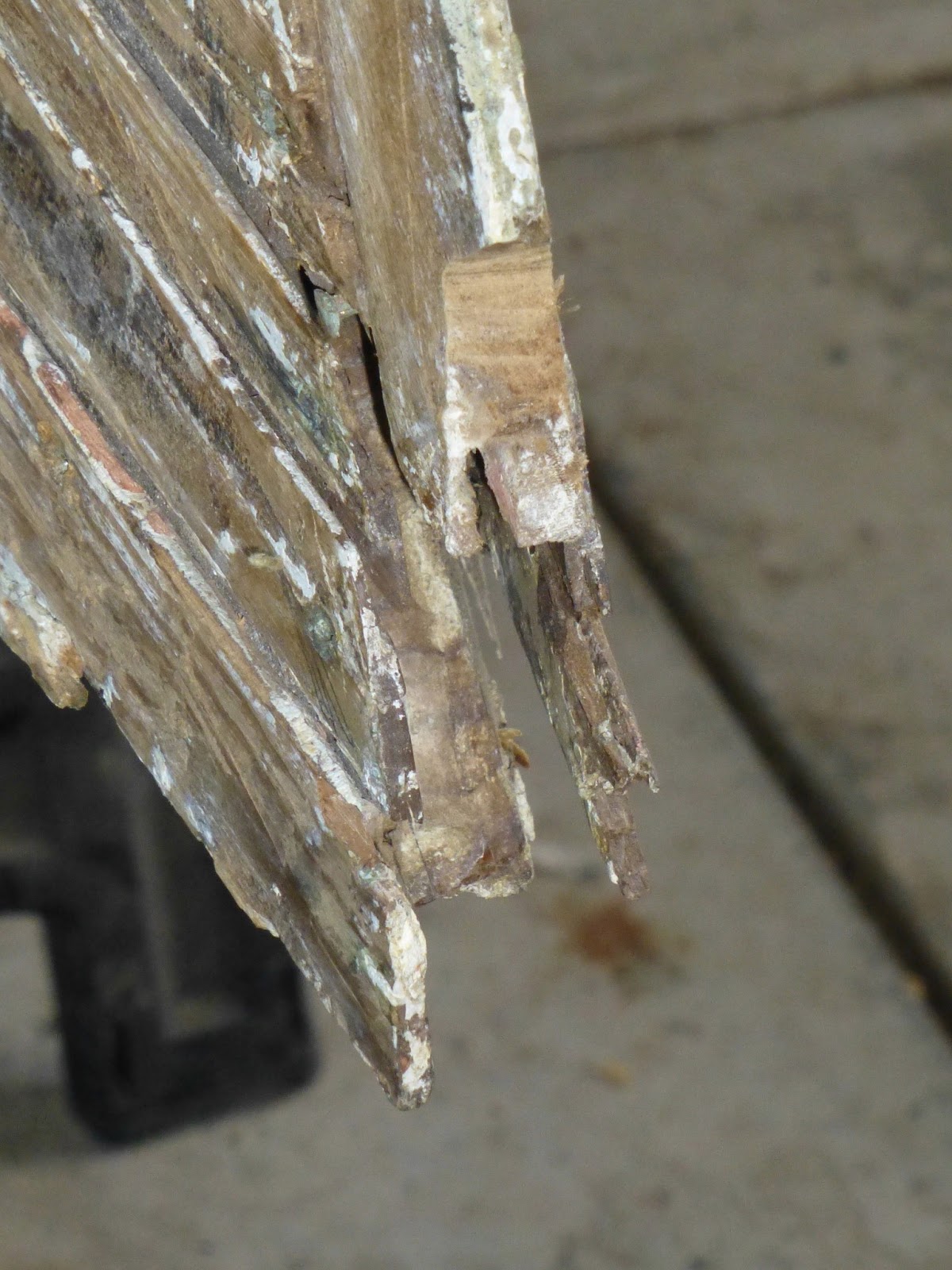 A decision is still needed on the sails and rigging layout with a simple lugsail currently favourite.
Posted by Shamrocks Crew at 10:58 No comments:

A Date For Shamrock Watchers

Shamrock is due to depart for Plymouth's Royal William Yard on Friday 19th July. The afternoon high tide is around 3 p.m. so she should be afloat and away by 2 p.m. Loading is scheduled to start late morning, no not cargo just the bits we need for the trip. As usual this depends upon the weather but so far it's looking good.
Posted by Shamrocks Crew at 08:36 No comments:

Last weekends 'Wet Wet Weekend' went well with one of the highlights being the 'Splash and Dash', the splash being a quick swim in the river followed by the dash a run around the Cotehele estate. Members of Shamrock's crew were involved in the splash, manning Nancy Belle (safety boat) and both work boats (course marshalling). Thankfully all was quiet and time was even found to shoot a few video clips.

Other weekend attractions included demonstrations from various organisations including the Plymouth Model Boat Club and Saltash Maritime Cadet. The RNLI's display had the twist of allowing children, dressed in all the gear, to throw a rescue line, from a small rescue boat, to whoever was accompanying them, and then pull them to the boat. 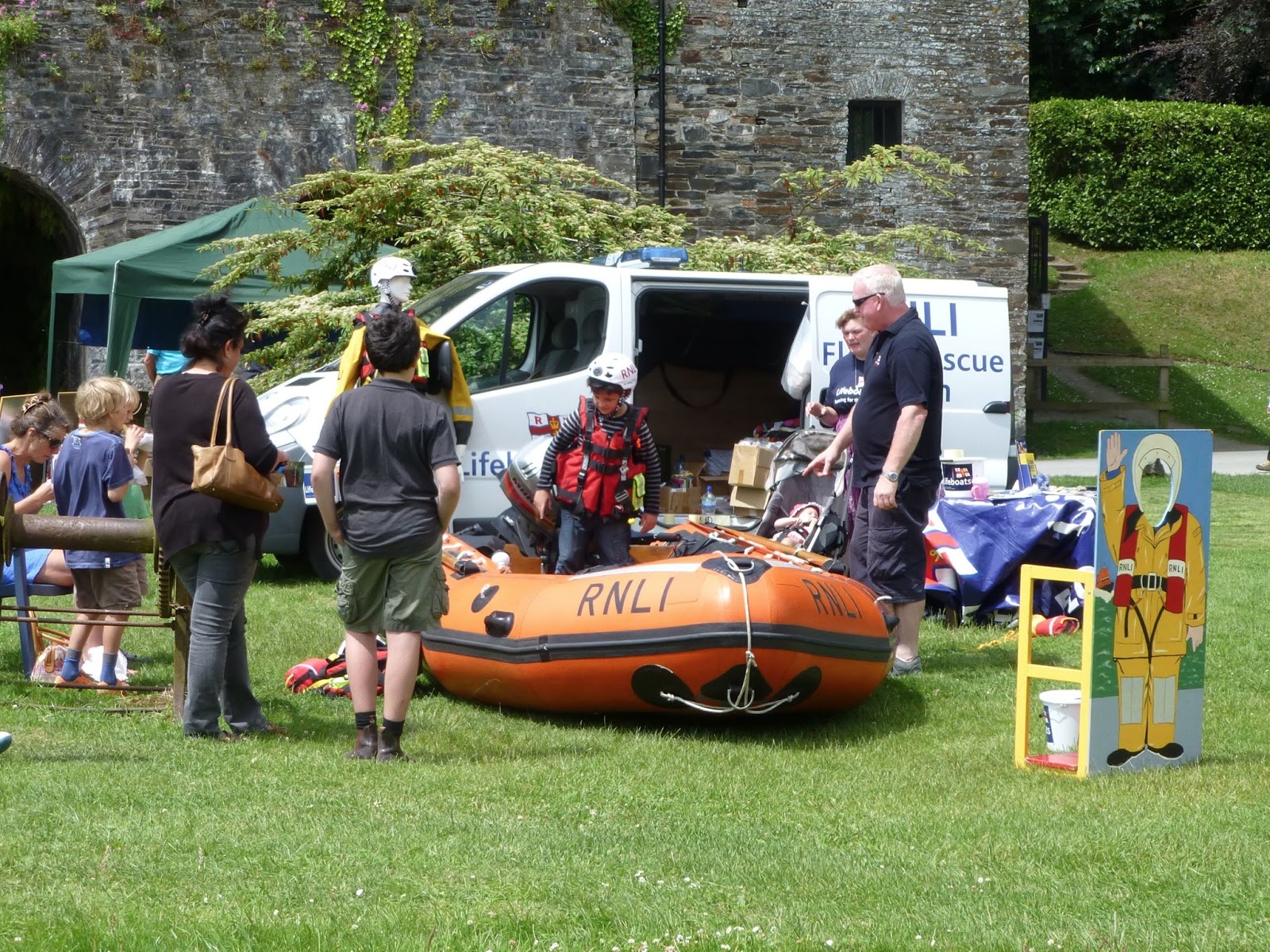 Last but not least Shamrock was open for visitors and had a busy two days with some children making two or three visits.
Posted by Shamrocks Crew at 22:04 No comments: