Due to Shamrock's skipper Shaune recovering after a planned minor operation, Shamrock will not be making an appearance at the “Sutton Harbour Plymouth Classic Boat Rally” this year.

There is better news though, the new fire pump has arrived to assist in the re-profiling of Shamrock's dock and slipway. It will soon be put through its paces as the last couple of weeks have seen a significant deposit of mud.

Posted by Shamrocks Crew at 22:25 No comments:

Not Quite To Plan

With the river mud building up in Shamrock's dock and on her slipway it was time to get out the fire pump and re profile (wash out) the dock and clear her slipway. The plan of action being.

Day One
Clear the mud from the slipway.

Day Two
On the morning tide float Shamrock onto the slipway, let her ground on the falling tide and then clear the mud from her dock. This had not been tried before as normally when Shamrock is on her slipway she is sat on her cradle.

Day Three
Float Shamrock back over into her dock on the morning tide ready for the days visitors.

All went according to plan until the pump decided to stop working half way through clearing the dock out on day two. Shamrock was returned to her dock on day three only when the tide is out she sits higher on the mud than planned. On the positive side it did prove that Shamrock can be left on her slipway for the odd day as long as the next days tide is high enough to float her off. While she was sat in the slipway advantage was taken of the easer access to the main mast port chainplates with them being scraped clean and painted.

Posted by Shamrocks Crew at 21:28 No comments:

The crews summer Shamrock painting schedule has come to halt in the last few weeks due to the return of what is becoming normal summer weather, wet, overcast and with the occasional sighting of the sun. This has meant the clinker built "Mayflower" sailing dinghy has been receiving the crews attention with the outer hull being scrapped back to bare wood and then soaked with a saline solution to help preserve her. Some of her internal structures and fittings have been removed along with a start on the scraping of the inner hull. There is also a rumour that a couple more small boats are due to appear in the boat shed ready to receive the Shaune treatment. 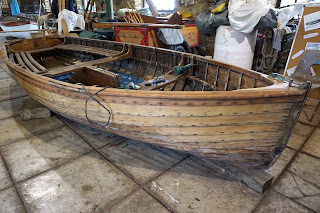 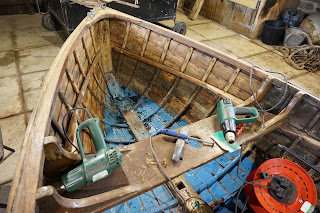 Posted by Shamrocks Crew at 16:54 No comments: