After a wet trip form Cotehele Shamrock's soggy crew finally left Shamrock berthed at Saltash Sailing Club's pontoon ready for this weekends regatta. Nancy Belle, with her new engine, was used to push her and proved to be up to the job with Shaun's boat 'Arab' standing by just in case.

A new coat of paint.

Advantage was taken of the time between Shamrock being moored mid river and departing for Saltash to paint her hull above the water line. She is now looking a lot smarter.

Posted by Shamrocks Crew at 20:22 No comments:

As Shamrock is due to depart for Saltash on Friday 26th and there is some doubt if there will be enough water to get her out of her dock at high tide, due to the tide hight's falling off towards neap tides, Shamrock has now been moved to her mooring in the middle of the river. This means that she will not be open for visitors until the weekend at Saltash Regatta. On her return to Cotehele Quay on Monday 29th she may also need to be left on her mooring until the tides build sufficiently to get her into her dock. Shamrock's crew will also be ferrying equipment to her throughout the week. 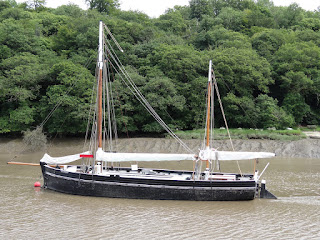 After the third washing down of Shamrock's slipway the final peaces of the old slipway track have been removed. Now the decision is do we renew the track or fit wheels with solid rubber tyres to the existing cradle. 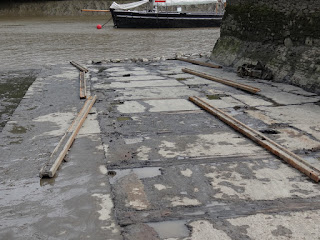 Posted by Shamrocks Crew at 11:23 No comments:

Weather permitting Shamrock is due to depart for Saltash from Cotehele Quay at 11:00 on Friday 26th June and should arrive at Saltash Sailing Club pontoon a couple of hours later. She will be open to the public on the Saturday 27th and Sunday 28th, with the start of her return journey scheduled for midday on Monday 29th. In preparation for this the crew is currently busy touching up her bulwarks paint. 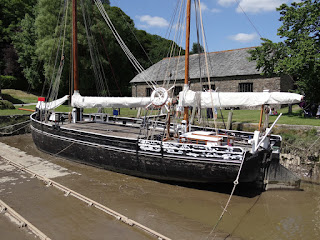 Posted by Shamrocks Crew at 19:37 No comments:

The weather was calm, the tide was falling, so out came the fire pump, [on its new set of wheels], ready for dock and slip washing duties. As the pump was being prepared a large Tamar crocodile was sighted floating down the river. This resulted in a flurry of activity from Shaune, the pram dingy was quickly launched and he went hunting. The log turned out to be larger than first thought and by the time it was secured to the dingy it had drifted to the bottom end of Cotehele Quay heading in the direction of Plymouth therefore requiring a bit of power rowing to get back across the main river flow. Once in calmer waters it was a gentle row back to the boat shed slipway where the log was beached cut up and stowed ready to fuel the boat sheds log burner. After the successful hunt it was then back to the job of clearing the slipway and getting as much mud out of Shamrock's dock as possible with her still sat on the mud. She did manage to slip back about 6 in (15 cm). 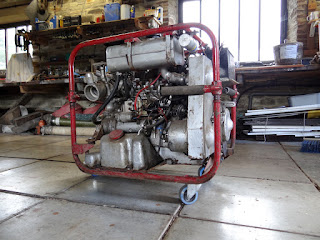 Tamar crocodiles are tree trunks or large logs that float down the river almost completely submerged.
Posted by Shamrocks Crew at 19:43 No comments: