Shamrock has been getting a bit of a wash and brush up in preparation for the first of this years visitors. For the first few weeks of her opening visitors will be able to see her in a different light as she is not yet fully rigged or equipped. An empty chain locker is one of the highlights and early morning visitors will witness the various stages of her being rigged.

Posted by Shamrocks Crew at 17:11 No comments:

Being part of Shamrock's volunteer crew has its plus points when you look at the view we have to endure while having a midmorning cup of tea. 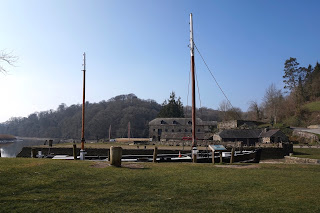 Those with an eye for detail will notice that Shamrock's mizzen stay wires are missing. These have been removed to the boat shed, wire brushed, lightly coated in linseed oil and then a final coat of Shaune's secret mix of linseed oil and roofing bitumen. The stays now look good and ready to be reattached to the mizzen. Time will tell on how well the mixture stands up to the English weather. 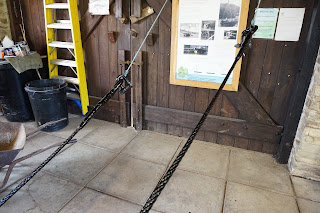 Nancy Belle's hull, above the waterline, has been painted, her gunnels varnished and she is now just about ready to be moved to the boat shed slipway ready for a few final touches before being floated off ready for her river trips and other duties. 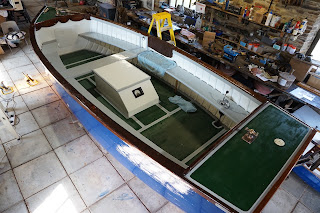 Posted by Shamrocks Crew at 21:18 No comments:

Saturday 16th April 2016 has been chosen as the date to celebrate the handover of Shamrock shares held by the National Maritime Museum to the National Trust. The tide is right so the old lady should be afloat ready to welcome her visitors.

While preparing the handovers official paperwork, copies of Shamrock's old registry documents were found, including her first one which is dated 7th September 1899 with Tom Williams as sole owner and there is a single entry dated 27th May 1907 recording when Tom and his brother Fredrick became joint owners with 32 shares each. There is an entry in red which reads 'Registry closed this 14th July 1919. Vessel reregistered anew in consequence of material alterations'. This was the result of having an engine fitted and instead of being a pure sailing ship Shamrock became a sailing ship with auxiliary motor. 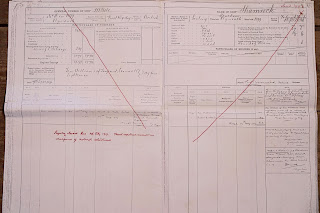 Posted by Shamrocks Crew at 10:37 No comments:

It started with a knock on the boat shed door, there stood a visitor who reported that a deserted dingy was floating past the quay on the outgoing tide. This resulted in a quick launch of the pram dingy. Some power rowing from Shaune enabled him to catch up with the dingy before it was about to round the first bend and head towards Plymouth. After securing a tow line and a bit of hard rowing to get out of the main current into the quieter water by the river bank, it was finally towed back to the boat shed slipway and hauled out of the water.


Posted by Shamrocks Crew at 20:14 No comments: