While deserting her Cotehele dock Shamrock had a very successful weekend at Saltash Regatta with plenty of generous visitors donating a total of £200 towards her upkeep and with the bonus of a good soak in saltwater.

First she was boarded by Cornish wreckers, well the Wreckers Border Morris from the Tamar Valley. They first sang a sea shanty on-board followed by the Morris dancers strutting their stuff on the pontoon while accompanied by their musicians still on-board Shamrock.

Later on two young brothers tried their hand at swabbing her deck and instead of, as was intended, just swabbing a small section of the after deck they would not stop until they had completed the whole deck. It certainly saved the crew a job.

Shamrock obviously left an impression on some of the Saltash school children who recently visited her at Cotehele as quite often you would hear one of them telling their parents that she was built in 1899 at Stonehouse Plymouth with a few other facts while showing them around.

Mondays return trip was another sunny uneventful cruise with Little Charly smoothly taking the tow straight off the pontoon at Saltash and releasing it on the last bend before Cotehele Quay. Shamrock then slowly drifted alongside the quay with just a small nudge from Nancy Belle. After a quick cup of tea while waiting for high water she was then slowly warped (roped) into her dock ready to resume her duty as one of Cotehele's visitor attractions.

Posted by Shamrocks Crew at 20:54 No comments:

Thanks to a tow from Little Charly Shamrock had a quiet trip down the river Tamar and is now berthed at Saltash Sailing Club. She is ready to be one of Saltash Regattas star attractions.


Posted by Shamrocks Crew at 22:55 No comments:

Preparations for Shamrock's first trip of the year to Saltash Regatta are well under way. The weather forecast is good and Shamrock is due to depart from Cotehele Quay at around 11:30am on Friday 20th June for the approximately two hour trip. She is due to berth alongside Saltash Sailing Clubs pontoon for the weekend ready to receive visitors during the regatta (21st and 22nd June).
Shamrock's departure from Saltash is scheduled for around midday on Monday 23rd June allowing plenty of time to arrive back at Cotehele Quay before the afternoons 2:50pm high tide.

Nancy Belle has now completed her first river trip since the fitting of her new engine. Rumor has it that you can now communicate between the bow and stern without having to shout or use sign language. 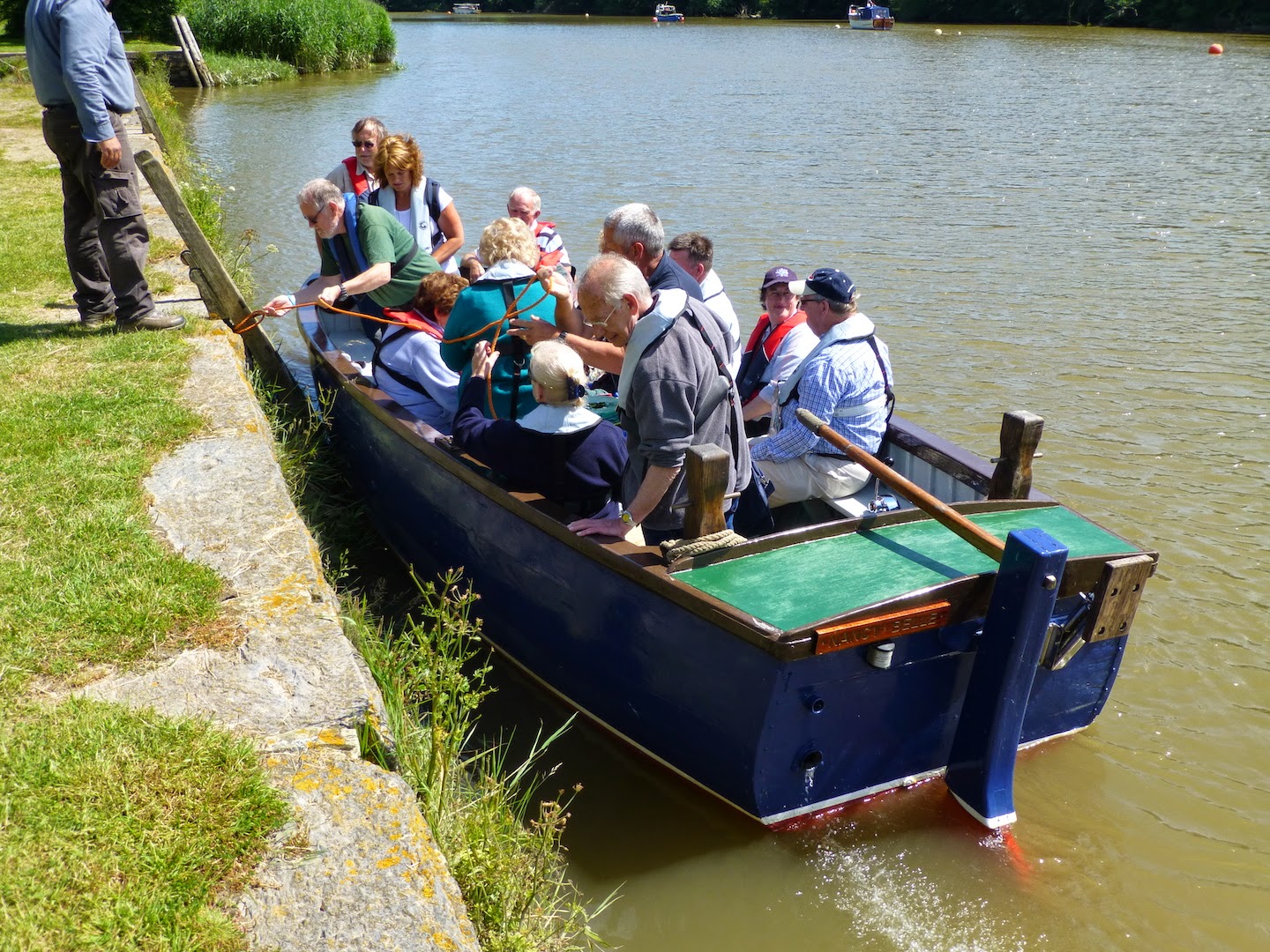 Posted by Shamrocks Crew at 22:55 No comments:

After weeks of planning and preparation the Get Knotted workshops are now ready to start in July. The workshops will include instruction on how to tie eight basic knots and their uses also the history of rope making and knots.

Workshops will be held on Wednesdays in the Old Carpenters shed, Cotehele Quay starting at 10:00am and finishing at noon followed by a hot pasty lunch.

All this for the price of £10 per person and that includes the lunch. There will also be the option of purchasing a book on knots. Profits from the workshops will go to funding Shamrock.

The fitting and commissioning of Nancy Belle's engine has been completed. She is due back in the water on Monday 16th June in time for her next river trip on the 18th. Life on her will now be quieter and have less vibration.
We now have an in working order 1978 20hp SABB engine and gearbox for sale.
Posted by Shamrocks Crew at 09:07 No comments:

With the arrival of the new longer shaft, propeller and coupling the job of fitting Nancy Belle's new engine has started in earnest. The new Yanmar engine is a lot smaller and lighter than the old Sabb engine and the engine bed height needed to be reduced to allow for the adjusting mounts, such a luxury as the old engine bolted directly onto the bed causing vibration. Once the shaft had been slotted into place the new engine was finally lifted in, with the aid of a log lifter, and temporarily aligned. The final engine alignment will not take place until she is afloat and taken up her normal shape. New engine and switch boxes now need to be manufactured and fitted and finally a combined throttle and gear lever fitted by the tiller, another luxury instead of letting go of the tiller and diving for the gear lever and separate throttle.
Perfectionist Shaune is already resigned to the fact that her water line will need to be repainted as she will be floating higher in the stern. 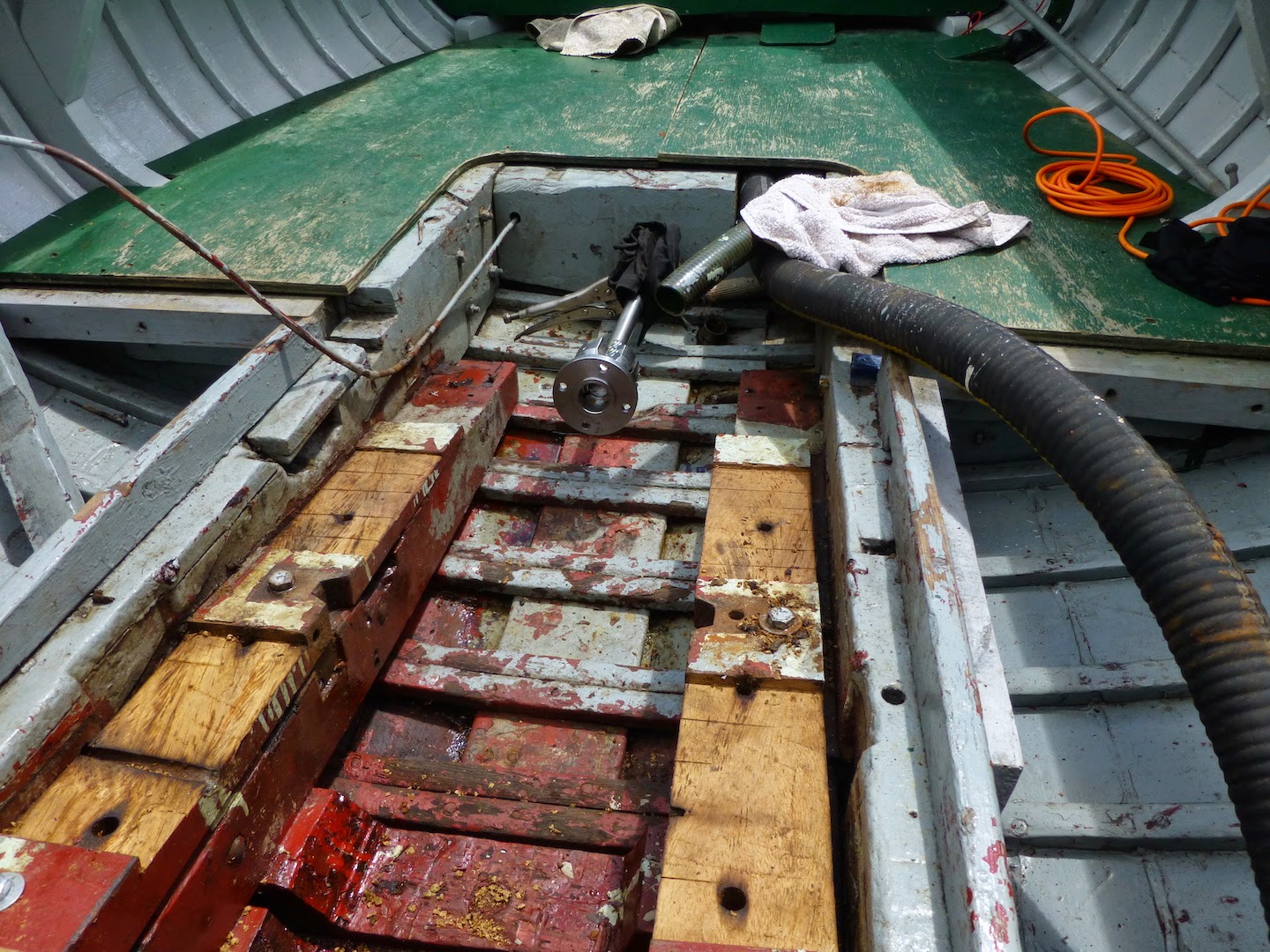 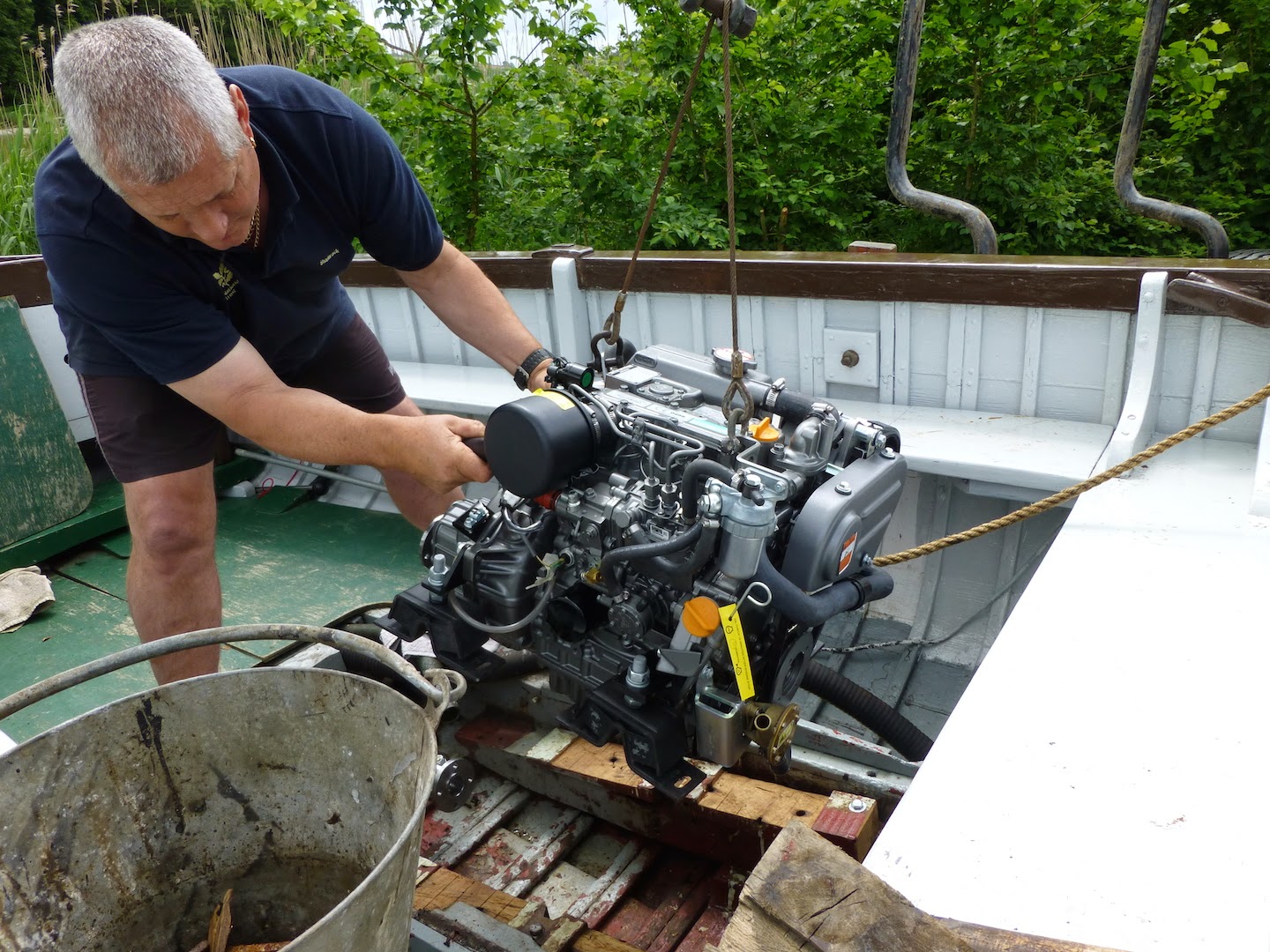 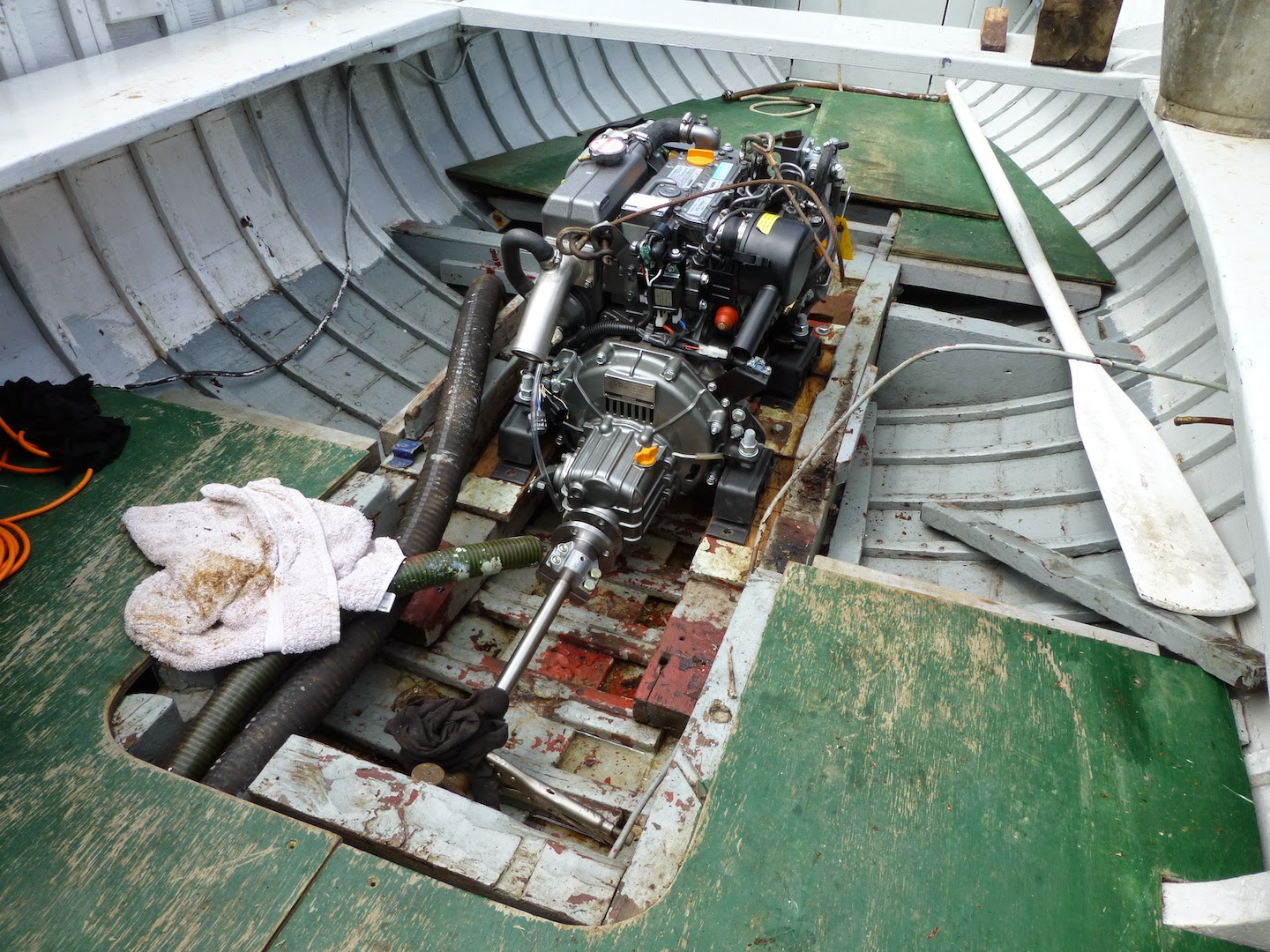 Posted by Shamrocks Crew at 15:03 No comments: