Fine weather helped with Saturday 26th successful celebration marking 40 years since Shamrock arrived at Cotehele for the start her restoration. She had her sail covers removed, ships bell and navigation lights put in place and was dressed overall.

Three of the original post restoration crew Giles Clotworthy, John Longworth‐Kraft and Peter Bee attended the event and swapped yarns with the present crew. Lots of tales about the near misses had by Shamrock on her various trips. Giles also brought along a painting of Shamrock returning to the quay after her first trip along with his scrapbook of old photos. 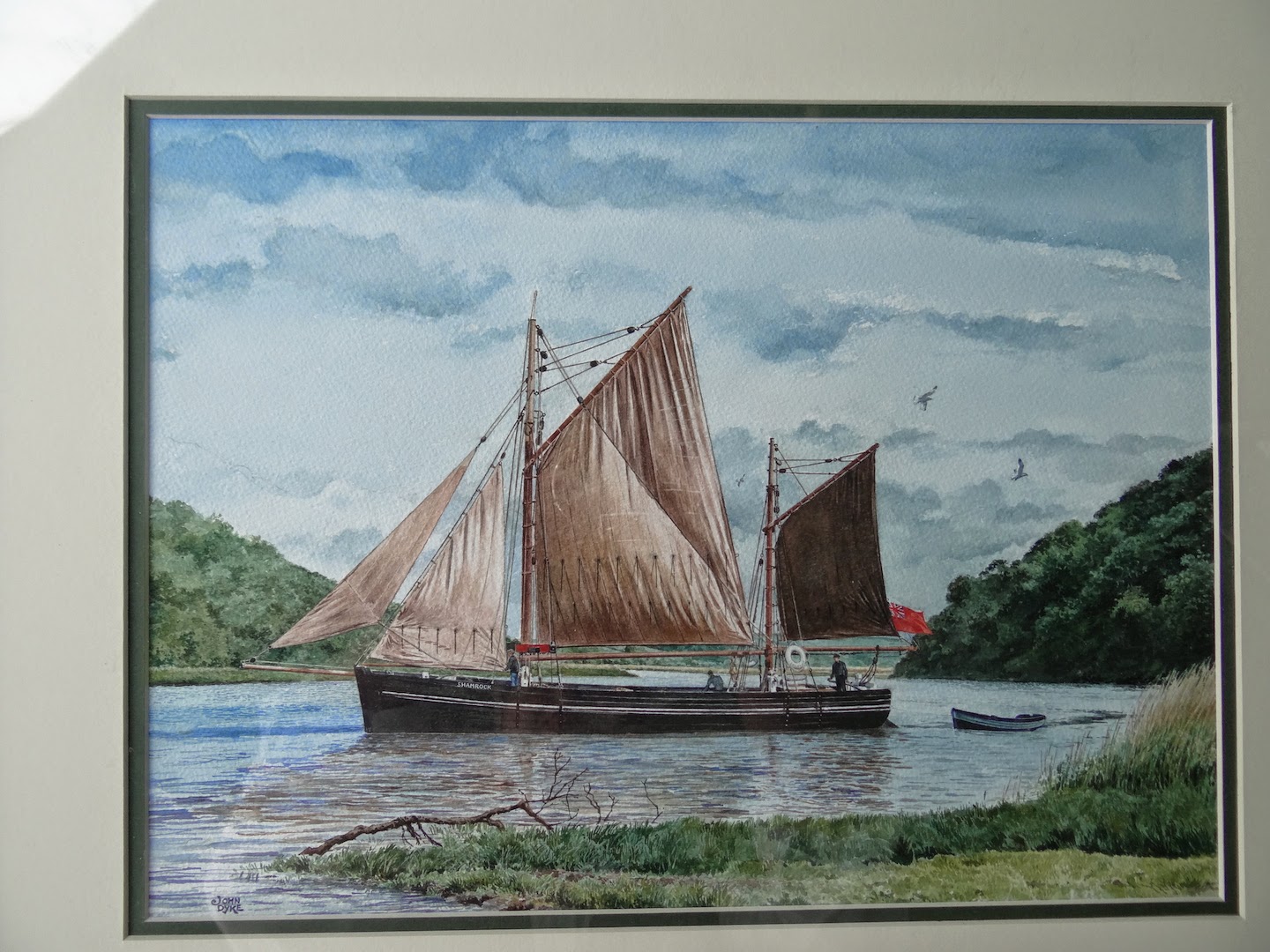 One of the most popular attractions, apart from viewing Shamrock was the lifting of weights with ropes and pulleys. The original idea was for the children to lift an adult demonstrating the mechanical advantage of the pulleys. Children being children had other ideas though as they wanted to be lifted by an adult, one lad even insisted on being lifted a second time so he could take a selfie.

Anthony Rose sang sea shanties onboard Shamrock and following his performance the “Wreckers Border Morris Musicians” performed onboard whilst their “Morris” dancers performed on the quay. The final musical entertainment was supplied by the “Trig Morris Men” of Bodmin on the main quay. 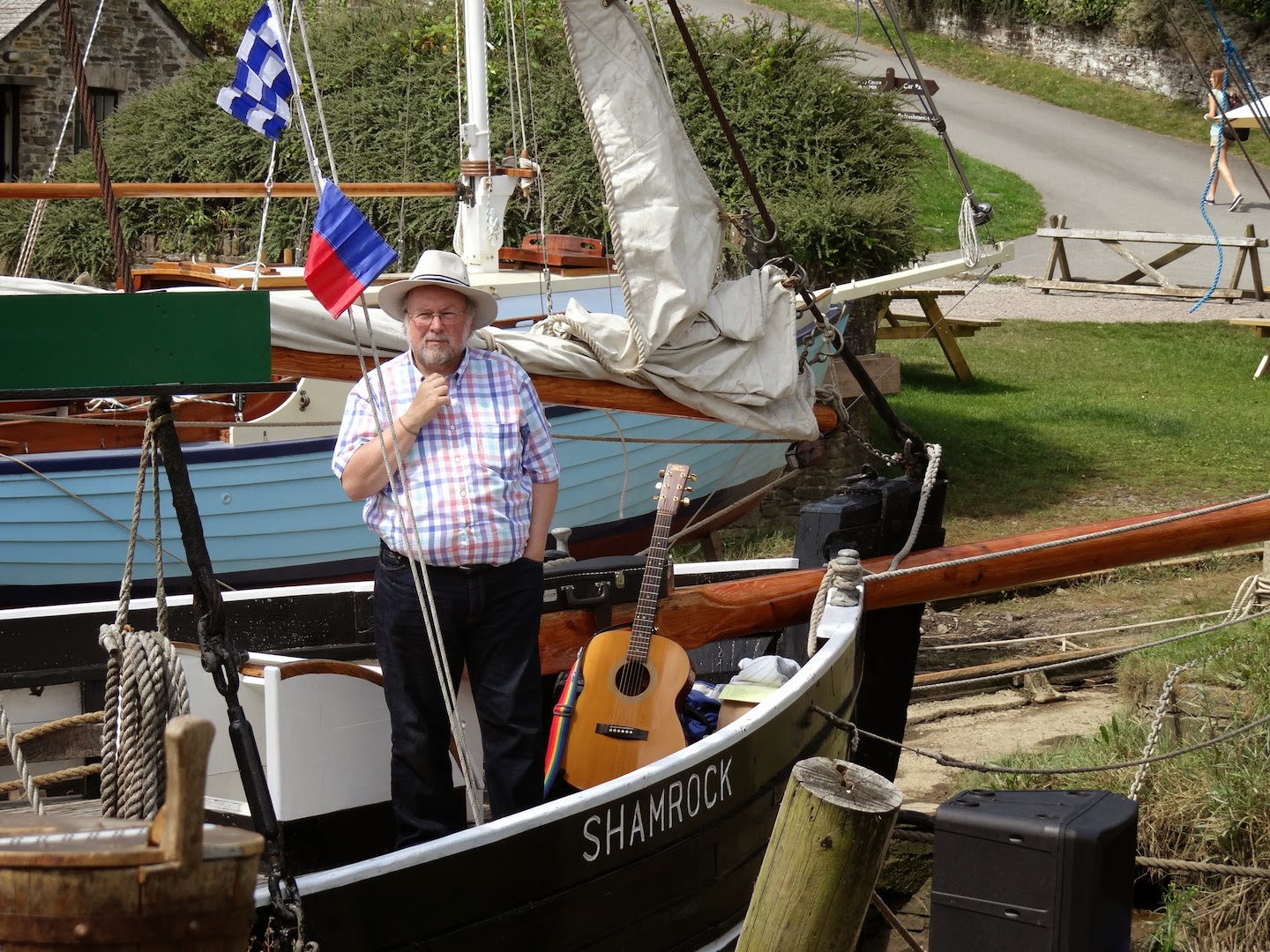 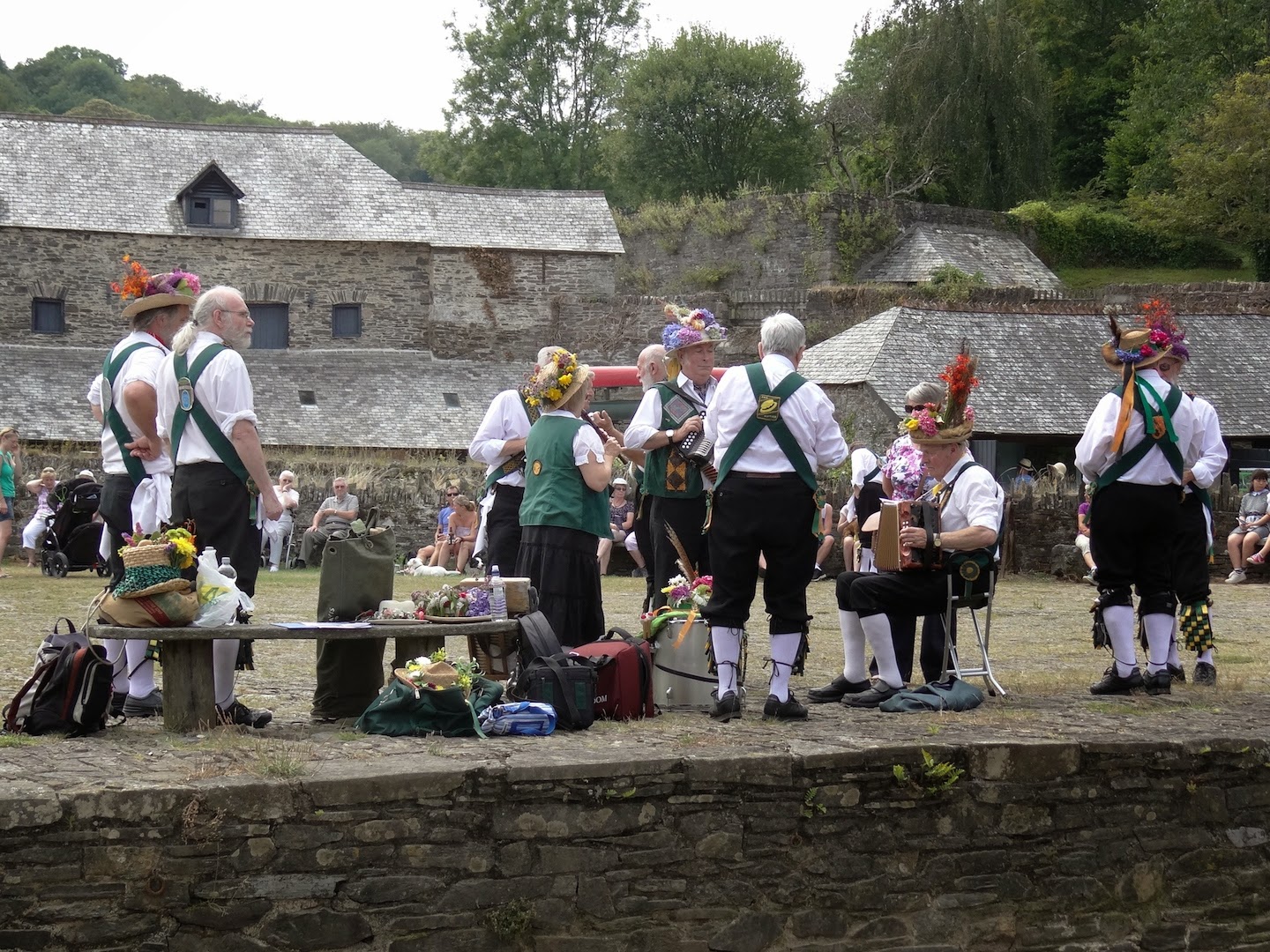 Other attractions included a demonstration of the garden game Smite, the City of Plymouth Model Boat Club with a display of their crafts from steam powered launchs to remote controlled racing yachts and a demonstration of knot tying by the Get Knotted team. 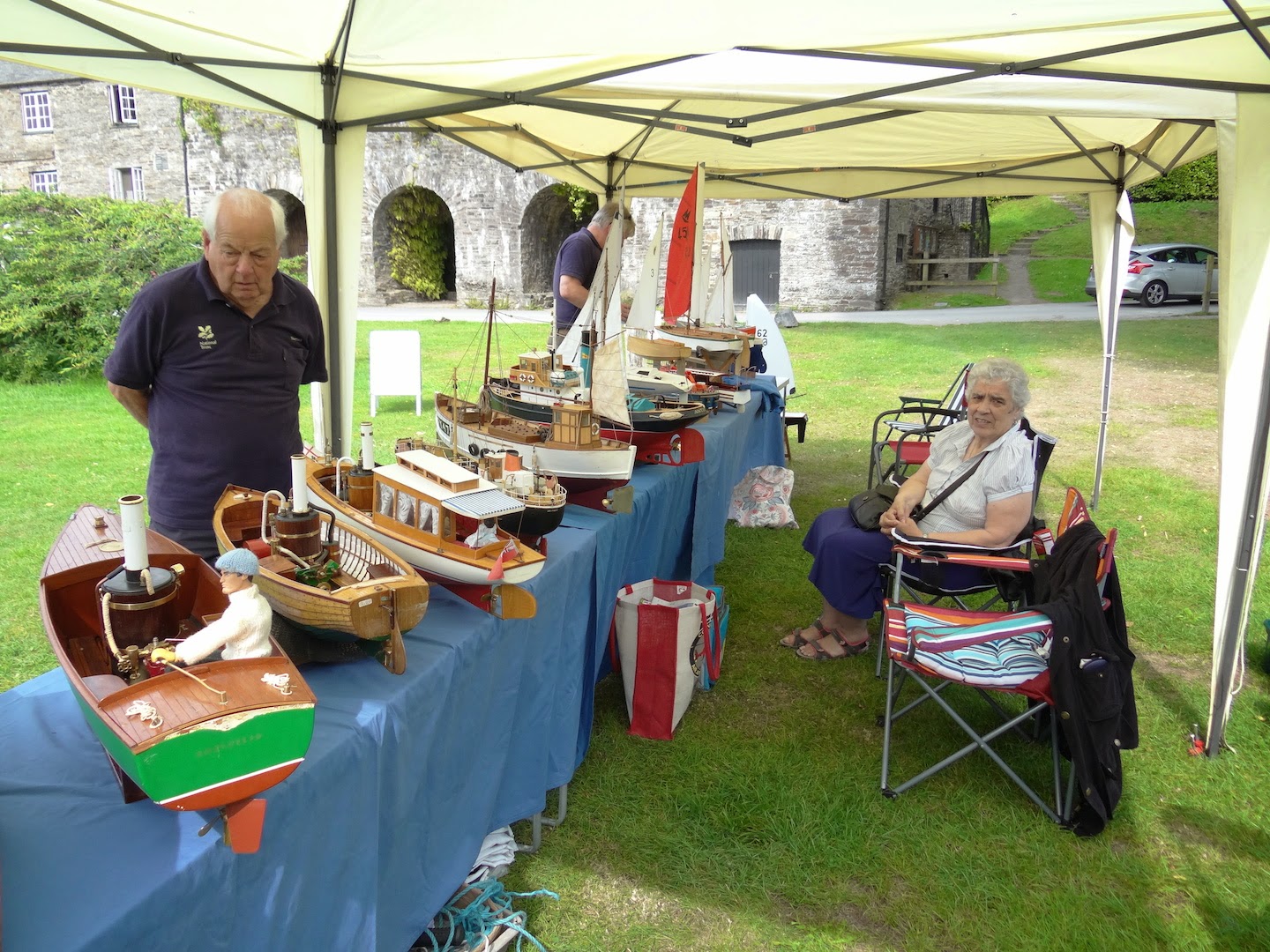 
Posted by Shamrocks Crew at 19:53 No comments:

Email ThisBlogThis!Share to TwitterShare to FacebookShare to Pinterest
Labels: get knotted, Shamrock

Preparations for the weekends celebrations to mark the 40 years since the start of Shamrock's restoration, are well under way with; the washing down of Shamrock's dock slipway, the production of new information notices boards, sorting the signal flags and yet, as the crew try to keep the boat shed clear more and more gear seems to be arriving all the time. Saturday morning is going to be a bit hectic!

There has also been an interloper on Shamrock's slipway with the arrival of Peter's 22ft (6.7 meters) clinker built gunter rig sloop "Shanti" in readiness for her to be floated off. This is what has been taking up Peter's time and part of his garden, since he retired in 2010.


Posted by Shamrocks Crew at 22:13 No comments:

Celebrating 40 Years Since The Start Of Shamrock's Restoration

Cotehele Quay is the place to be on Saturday 26th July to celebrate 40 years of Shamrock at Cotehele. Everything getting under way at 11:00 and finishing at approximately 16:00.

It is hoped that the event will be opened by Giles Clotworthy & John Longworth‐Kraft, they both had involvement in the restoration of Shamrock and her initial sea trials.

Plans for the day include:

After a bit of a false start the last couple of weeks has seen the completion of two successful Get Knotted workshops with one of the attendees even demonstrating the 'Alpine Butterfly Bend' while onboard Shamrock.
Posted by Shamrocks Crew at 11:17 No comments:

Being a Shamrock meet and greet volunteer brings with it some different challenges from the normal duties of a National Trust volunteer.

Weekends are the most hectic with the need to arrive at least half an hour before opening to manhandle the gangway into place, not so easy if it's a high tide, open up the forward and after hatches, remove the forward starboard cargo hatch board and reinstate the guard rail. Then the bilges need to be checked and pumped out if required, we can't have the visitors getting wet feet and finally, notice boards need to be placed to inform visitors that Shamrock is open and they are welcome on-board. The notice about what hazards to watch out for whilst on board and the need for parents to accompany children, is of particular importance.
From Shamrock’s perspective the most important piece of equipment is of course, the collection box, this needs to be strategically placed before removing the keep off notice.
After having welcomed the first visitors on-board, with the usual "do mind your head" greeting, is when it is realised that the raising of the ensign has been forgotten!

Some of the questions visitors ask, in no particular order.


At the end of a hopefully successful day a quick check for stowaway children is required before finally securing everything and shutting up for the night.


Posted by Shamrocks Crew at 22:42 No comments:

Unfortunately Shamrock's planned Plymouth's Royal William Yard weekend trip (4th to 7th July) has had to be cancelled. Friday's weather forecast is for wind and rain but the main reason is that we are lacking a tow.

No takers for this week's Get Knotted workshop, just hope we get a few for Wednesday the 9th as Nick and Will have put in a lot of preparation work.
Places can be booked on 01579 351346 or just arrive at Cotehele Quay by 10:00am .

On a positive note Shamrock's looking good from the river and she is attracting a lot of visitors. 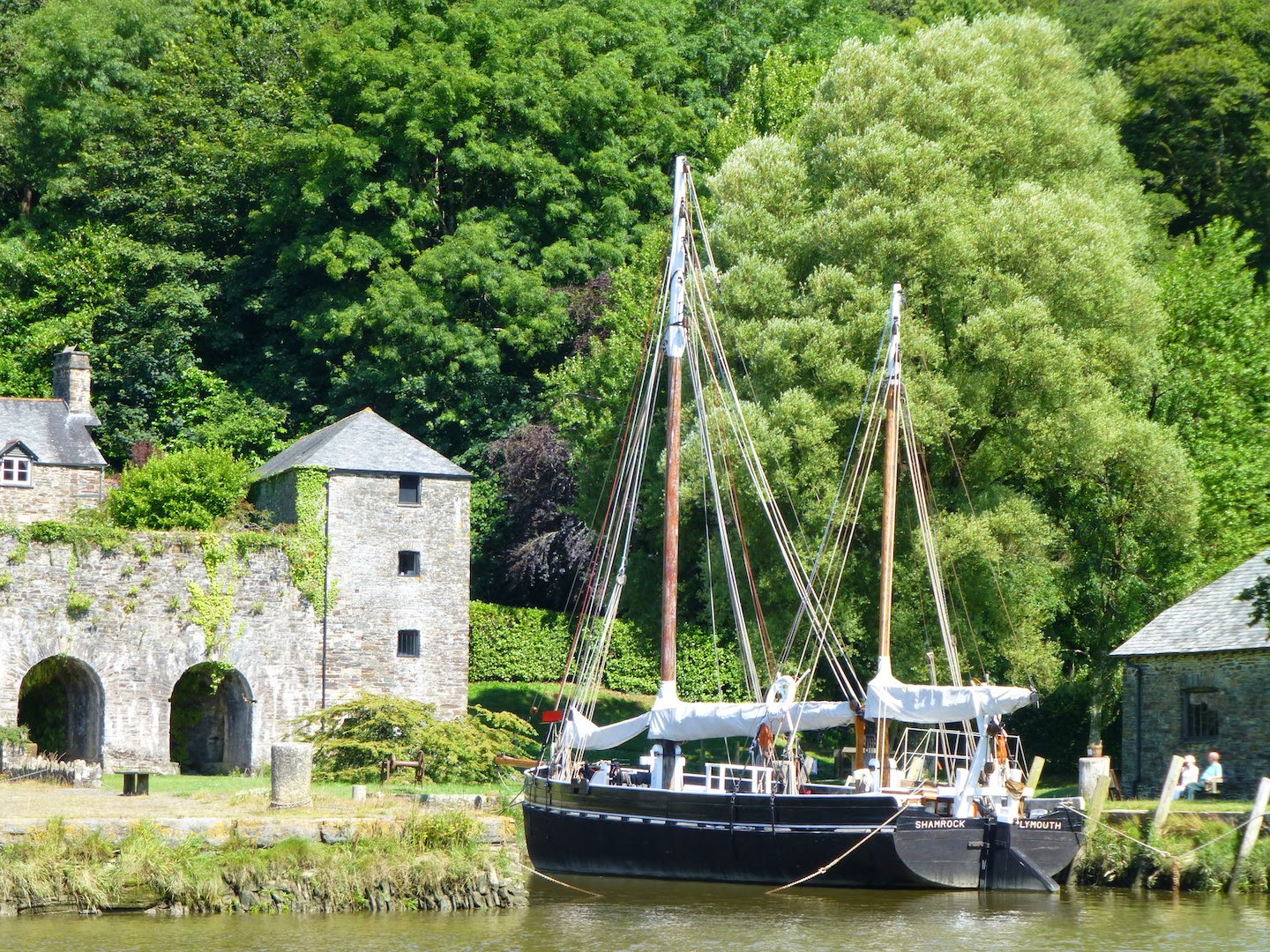 Posted by Shamrocks Crew at 20:02 No comments: