Shamrock had a successful weekend at the Plymouth Classic Boat Rally with a steady stream of visitors on the bright and sunny Saturday and a rush of visitors in the dry part of the afternoon on what was a mainly wet Sunday. Shaune was even spotted doing a couple of interviews! 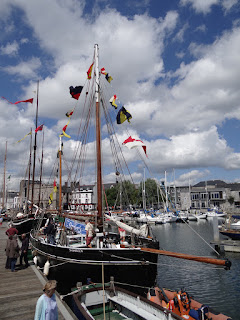 Due to high winds Shamrock's return trip was delayed until the afternoon of Tuesday 28th. Even then unseasonably high winds made for a difficult trip with the ruder having to be held over to try and keep her traveling on a straight course. With Nancy Belle pushing and a north westerly wind all the way the trip back to Cotehele was completed in about three hours with the biggest problem being the boats moored in the river at Weir Quay. With some of the boats lying into the wind across the river and some with the tide Shamrock was required to complete a bit of a slalom course to pick her way through them. Shamrock's rudder is made of large oak sections pivoted at the forward end resulting in no balancing forces when turning making the helming of her hard work. Skipper Shaune was exhausted by the end of the trip. On arrival back at Cotehele Shamrock was secured alongside “Steps Quay” to await the full tide and from there was roped around into her usual berth. A task which attracted considerable interest from the visitors on the quayside at that time.
Posted by Shamrocks Crew at 13:02 No comments:

After a extremely wet four hour journey Shamrock is now safely berthed at Sutton Harbour and once dressed overall will be open for visitors during the weekends Plymouth Classic Boat Rally 2015. 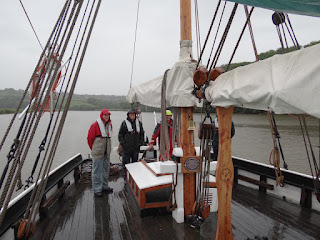 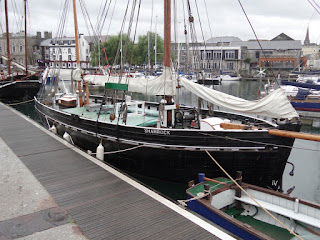 Posted by Shamrocks Crew at 22:07 No comments:

Shamrock has had a temporary crew member when Henry a pupil from Callington Community Collage spent his work experience week working both on Shamrock and in the boat shed. Henry impressed the crew as he completed every job he was asked to do well and with enthusiasm. The jobs tackled ranged from reeving the mizzen throat halyard blocks, (interesting), to scraping the old bitumen paint from the edge of the combined covering board and waterway*, (not so interesting). He also had an unusual method of transport as one day he appeared on an off road unicycle and ended up doing the odd demonstration ride around the quay. The only job that he did not tackle was making the crews tea! (A very specialised job in the Boat shed)

* Combined covering and waterway is the outermost strake of shaped deck planks. Shamrock's are made from 2in (50mm) elm.

With Shamrock back on her river mooring, in preparation this weekend’s trip to Plymouth, the river is starting to look a little crowded. 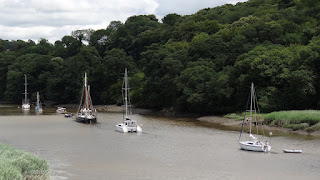 Posted by Shamrocks Crew at 21:39 No comments:

With some last minute painting and general preparations Shamrock is being prepared for her trip to Sutton Harbour Plymouth Classic Boat Rally 2015. As the tides will be dropping off Shamrock is due to be put on her river mooring about 10 am on Wednesday 22nd July and should depart for Plymouth approximately 10 am on Friday 24th and is due back at Cotehele on the afternoon tide on Monday 27th. She is scheduled to be open for visitors at Plymouth on the Saturday and Sunday. As normal with Shamrock trips bad weather can result in a last minute change of plans.
Posted by Shamrocks Crew at 20:38 No comments:

After a weekend of two halves, Saturday dry and sunny, Sunday a bit damp Shamrock has now returned to Cotehele Quay and is safely back in her dock. The weekend witnessed some different uses of Shamrock's deck, first the musical section of "Wreckers Border Morris" using her as a bandstand while the rest of the Morris danced on the pontoon. Next came “Western Approach” a close harmony group who used her as a stage for several of their renditions and finally she was used as a viewing platform for the start of the afternoons dingy race.

In keeping with the one wet and one dry theme the journey back to Cotehele was made in glorious sunshine as opposed to the wet trip to Saltash. The combination of Nancy Belle pushing, a good tail wind and going with the tide resulted in a record braking trip of one and a half hours meaning she arrived back earlier than expected and had to go alongside crane quay as there was insufficient water for her to go straight into the dock. The waiting did allow the crew time to grab a quick cup of tea before finally roping Shamrock back into her dock. One thing this trip has proved is that Nancy Belle, with her new engine and propeller, is quite capable of pushing Shamrock if the conditions are right.

Posted by Shamrocks Crew at 21:20 No comments: