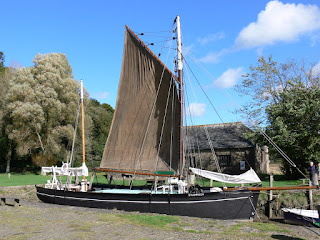 1899
Shamrock built by Frederick Hawke, Stonehouse, Plymouth. Designed with shallow draught for easy beaching, a keel consisting of an extra thickness of timber taking most of the wear from grounding, two drop keels providing lateral resistance when under sail. Rigged as a ketch, with a fore staysail, mainsail and mizzen.

Sailed between the Western Counties & General Manure Co. of Torpoint, and the L&SWR's Ocean Quay depot in Plymouth, carrying manure manufactured from crushed animal bones treated with chemicals. Bones were acquired from butchers, and could occasionally include those from stranded whales. Shamrock would return to Torpoint light, carrying neither commercial loads or ballast. The Williamses also traded along the Tamar, dredging sand between Pentillie and Halton Quay for Torpoint builders; also carrying coal, bricks from the Southdown Brickworks, and limestone from Pomphlett Lake to the lime kilns along the river.

1914
During WWI Shamrock worked in Plymouth Sound, carrying charged, but not fused, 18lb shells from Canadian ammunition ships for completion at Ocean Quay.

1918
Put into stone trade by the Williamses, mostly working from Lynher River quarries.

14 July: Registry closed and Shamrock re-registered in consequence of these alterations.

1920
Ownership transferred to the Notter River Stone Co. Various configurations of individuals, including members of the Steed family, continued to be the registered owners until 1962. Shamrock now carried road stone from Lynher, Plymouth and Porthoustock (east side of the Lizard) quarries. A usual load would be 40 — 50 tonnes of 2 1/2 inch or 1 1/2 inch blue elvan, a very hard stone.

1930s
Operating from Truro, Shamrock carried road stone from Porthoustock quarry to the County Highways Depot at Tresillian near Truro, and creeks and quays around Falmouth.

1934
Shamrock now technically smack rigged, and without a mizzen mast.

1951
Mayblossom laid up and left to rot. Shamrock is now the last Tamar sailing barge still trading under sail.

1963
6 Aug: Registered status discontinued in consequence of installation of motors, and Shamrock re-registered.

1966
14 April: Shamrock sold for £750 to Richard Curnow of Helston, engineer, and used for salvage work on wrecks in Mount's Bay and adjoining coasts. Guns, propellers, coins, and bronze and other metal objects were recovered by the crew operating with minimal involvement by the owner. By1966 in near derelict state.

Detained in Falmouth as unseaworthy. Reported to have been bought by Fred Easton, a former crew member who, it is also claimed, brought her back to Plymouth. There is no official record of this sale: Shamrock may have been regarded at this time mainly as a wreck, Richard Curnow remaining the registered owner. The old barge did however prove useful for a few years as a diving tender in Plymouth Harbour.

1970
Shamrock beached and used as a scrap iron store in Hooe Lake, Plymouth.

1974
11 Feb: NT becomes the new owner after a transfer fee of £l. A survey to establish the viability of
restoration is carried out by Commander Eric McKee and Basil Greenhill of the National Maritime Museum. After temporary repairs to enable Shamrock to be towed to Cotehele, she was brought back by Commander McKee and John Fildew, and arrived at the Quay on 25 March.

A slipway and cradle, and a storage shed, were constructed and Shamrock moved into a secure position for restoration, above the tide.

1979
May: Shamrock refloated, to be fitted out moored in her dock.
15 Aug: Restoration commemorated with a plaque on Shamrock's mizzen mast.

1982
Shamrock sailed again for the first time since her restoration, becoming a permanent feature at Cotehele Quay.

1983
On her maiden post restoration passage Shamrock sailed from Cotehele to Fowey in Cornwall.

1987
Shamrock returns to work as a day charter vessel, sailing the Tamar and local coast, and being looked after at Cotehele Quay for the next 30 years.

1999
Shamrock marked her 100th birthday with a voyage down the river Tamar.

2009
Shamrock visited Morwellham quay to take part in the filming of the Antiques Roadshow.

2010
Shamrock used in the filming of The Edwardian Farm series at Morwellham and Cotehele Quay.

2016
The National Trust acquired all of Shamrock's shares and became her sole owner.