Making an appearance in the boat shed is an abandoned fiberglass pram dinghy ready to be restored to a seagoing state. She will need a large hole in the stern of the keel line repaired, wooden gunnels replaced, resealed and polished. The seats seem in good condition and are probably the reason why the hull is still in one piece. Its planned to fit a small wheel or wheels to the stern which will facilitate one man launch and recovery. The intention is to use her as as a tender for getting Nancy Belle to and from her river mooring. At present this duty is performed by the Edgcumbe which, with great difficulty, can be launched single handed but recovery needs to be at least three handed or the aid of a handy-billy. The pram dinghy will also be useful for completing odd jobs on Shamrock's external hull, when there is sufficient water in the dock. 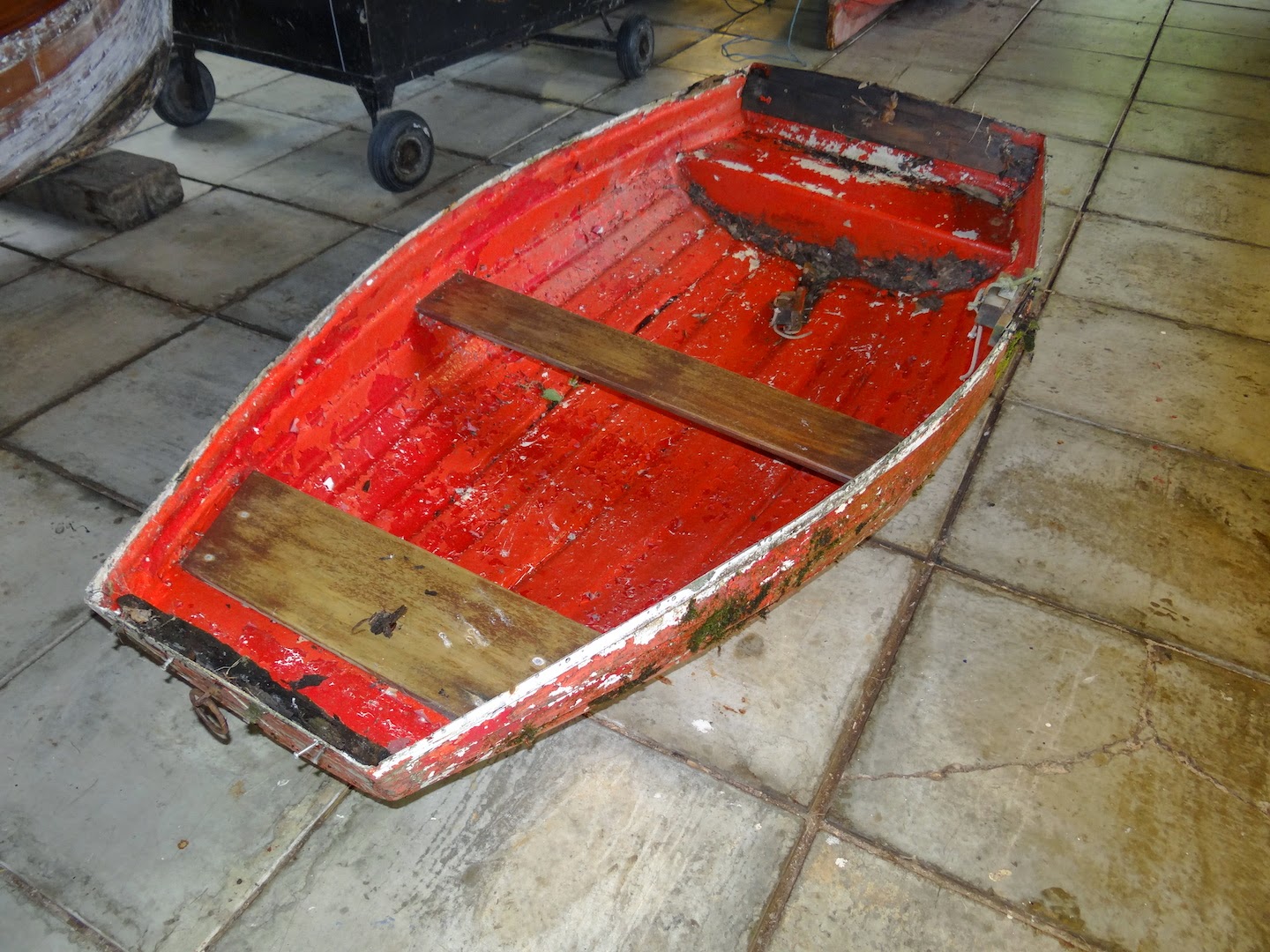 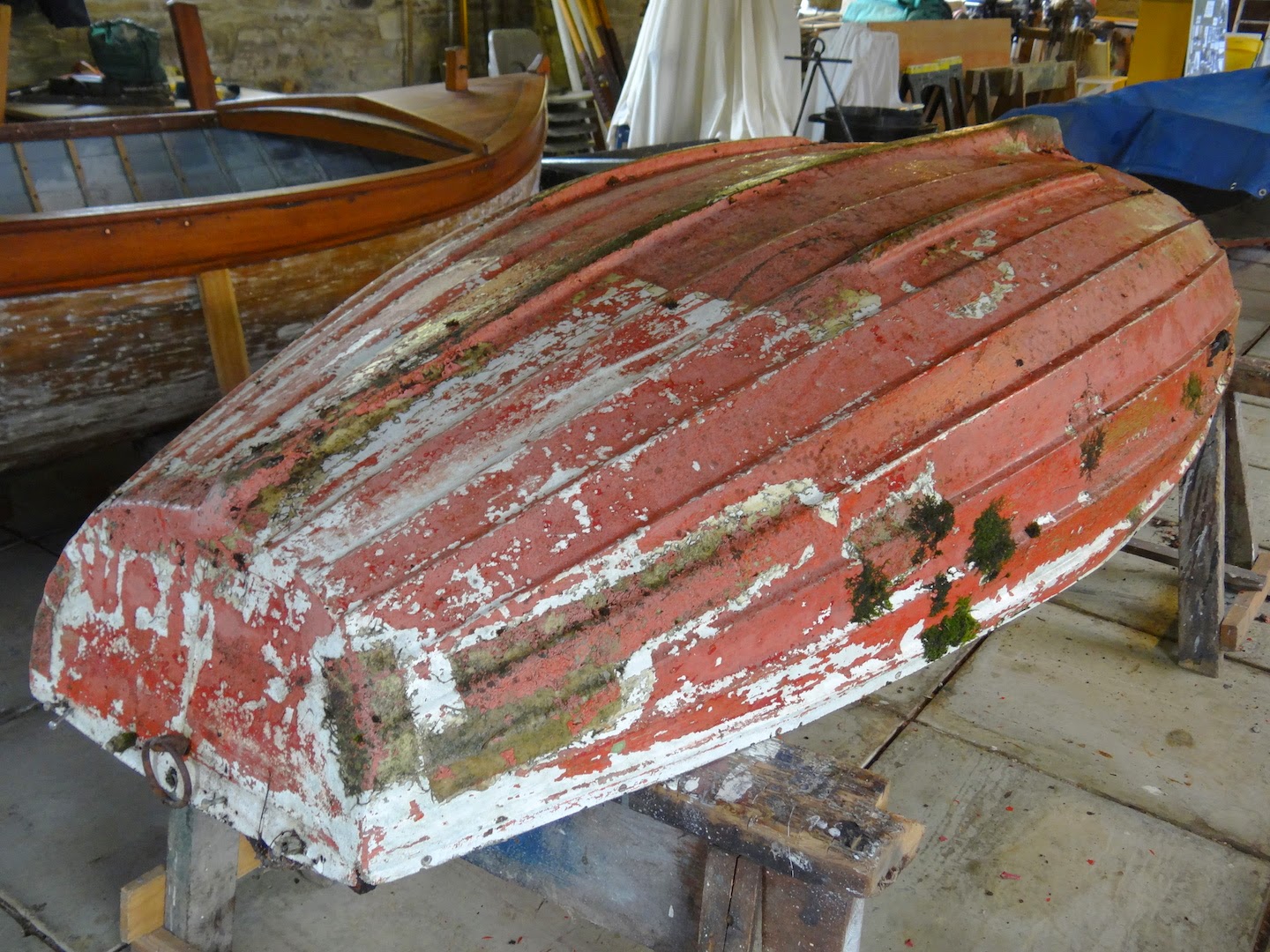 One for the album.

Posted by Shamrocks Crew at 20:00 No comments:

Shamrock has spent most of this summer at Cotehele Quay only having had one trip to the salt water so when a musty smell was noted on opening for visitors the need to salt her became apparent. First a new supply of salt needed to be obtained, this resulted in rather a large pile appearing in the boat shed.  Salting the cargo hold is no problem as one line of ceiling* planks on each side of the keelson are easily removed, for the purpose of pumping her out, also allow salt to be easily placed between each of the holds frames. Observant visitors to Shamrock have noticed the vents below the beamshelf which allows air to circulate between Shamrock's hull and ceiling planks, they also act as salting holes and are used in the salting of the remainder of Shamrock's hull.

Salt is also liberally spread on her deck, especially in areas that tend to remain damp.

*Ceiling, the inside planking of a ship's bottom and sides.

Posted by Shamrocks Crew at 19:26 No comments:

With the present weather being rather stormy the view of the Tamar from the boat shed can change completely during the course of a day.

After lots of toing and froing Peter's boat Shanti finally leaves Cotehele Quay and takes it's first trial trip on the Tamar. 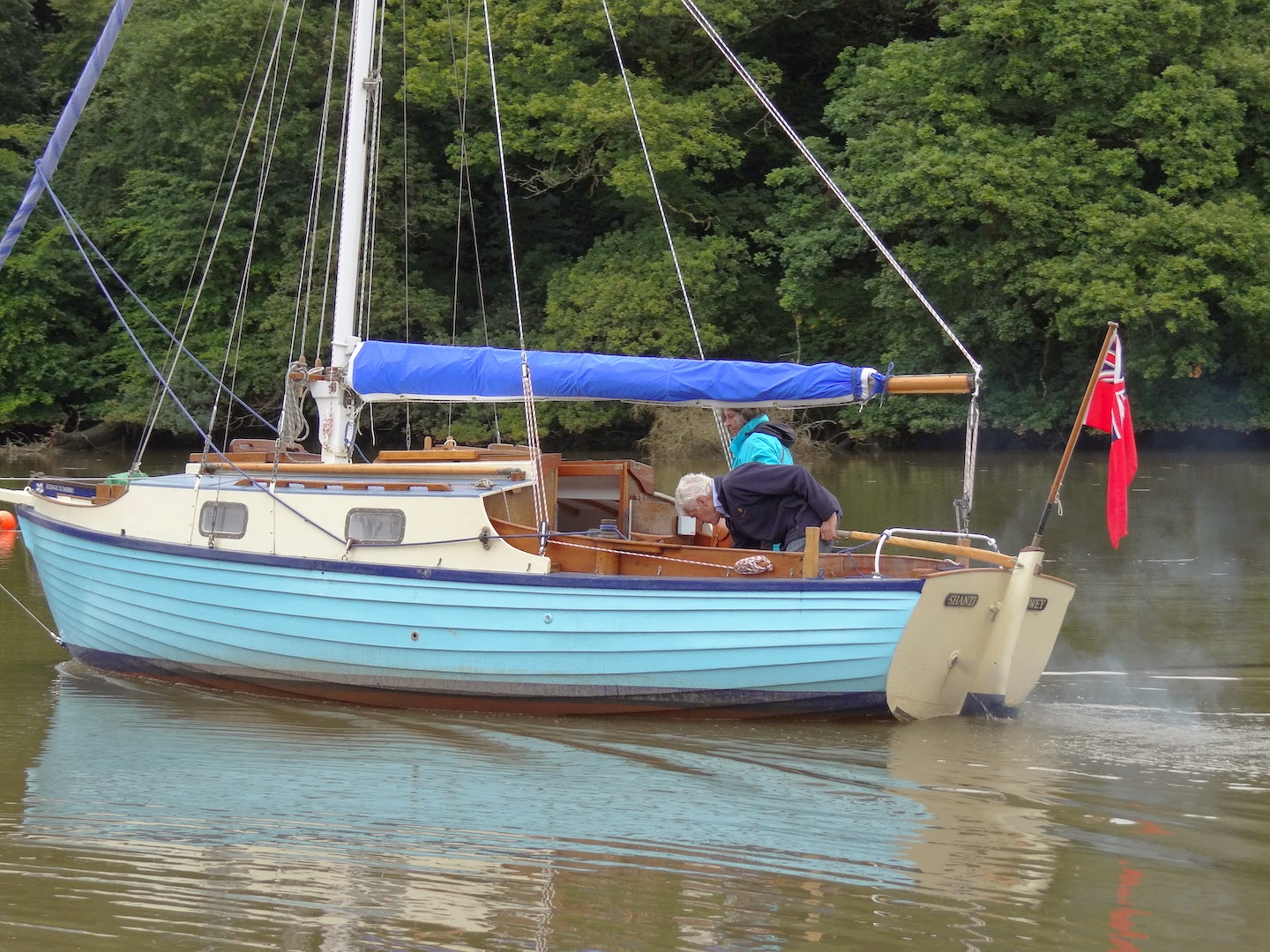 She was escorted by Nancy Belle and a fine example of Tamar Crocodile. 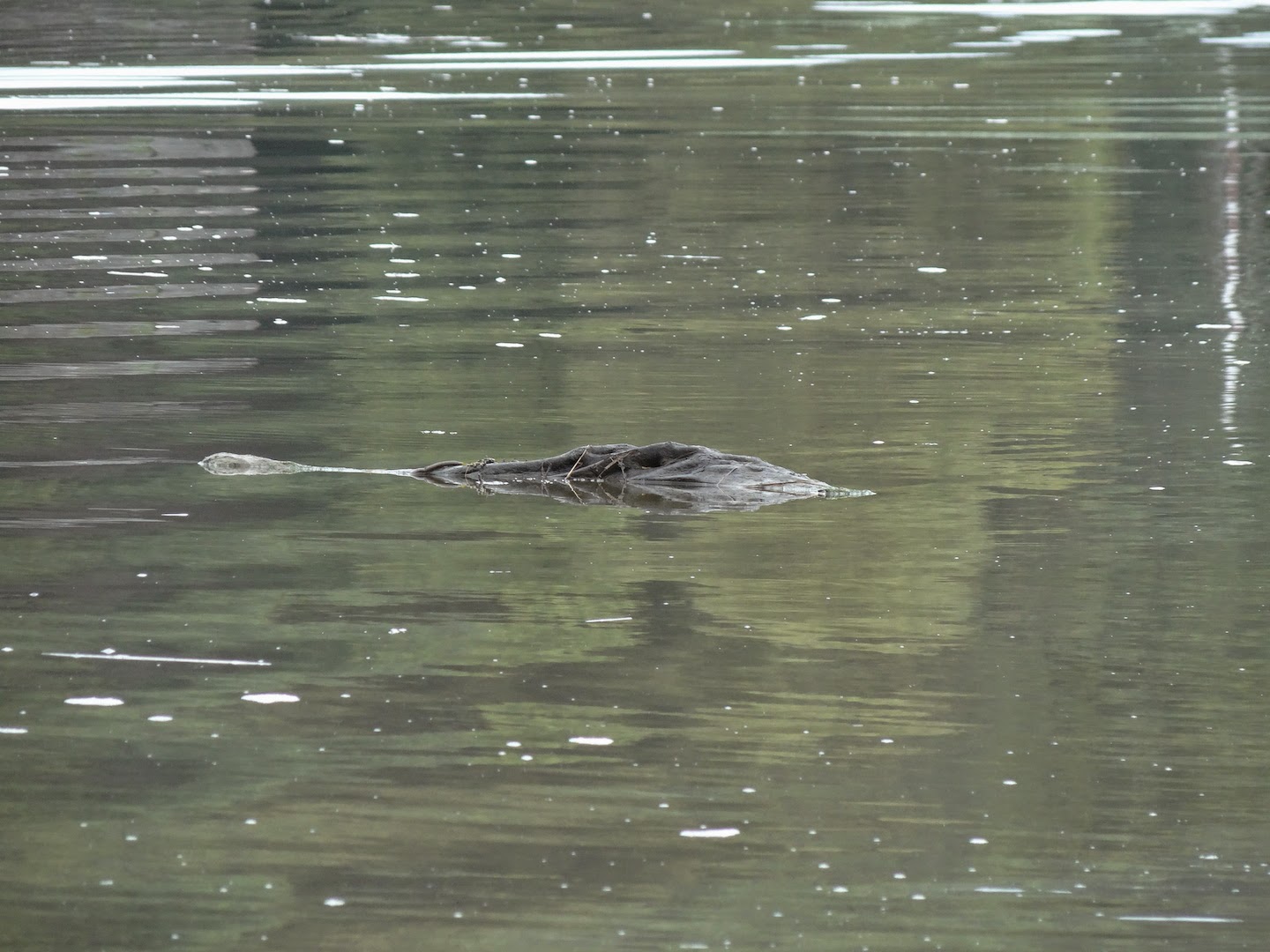 Posted by Shamrocks Crew at 21:26 No comments:

Over the last few weeks Shamrock has acquired a couple of new extras.
First, there is the new mizzen crutch designed to support the mizzen boom, this takes the bending weight of the boom, gaff and sail off the mizzen mast while she is docked.
This advantages over the old scissor crutch are: 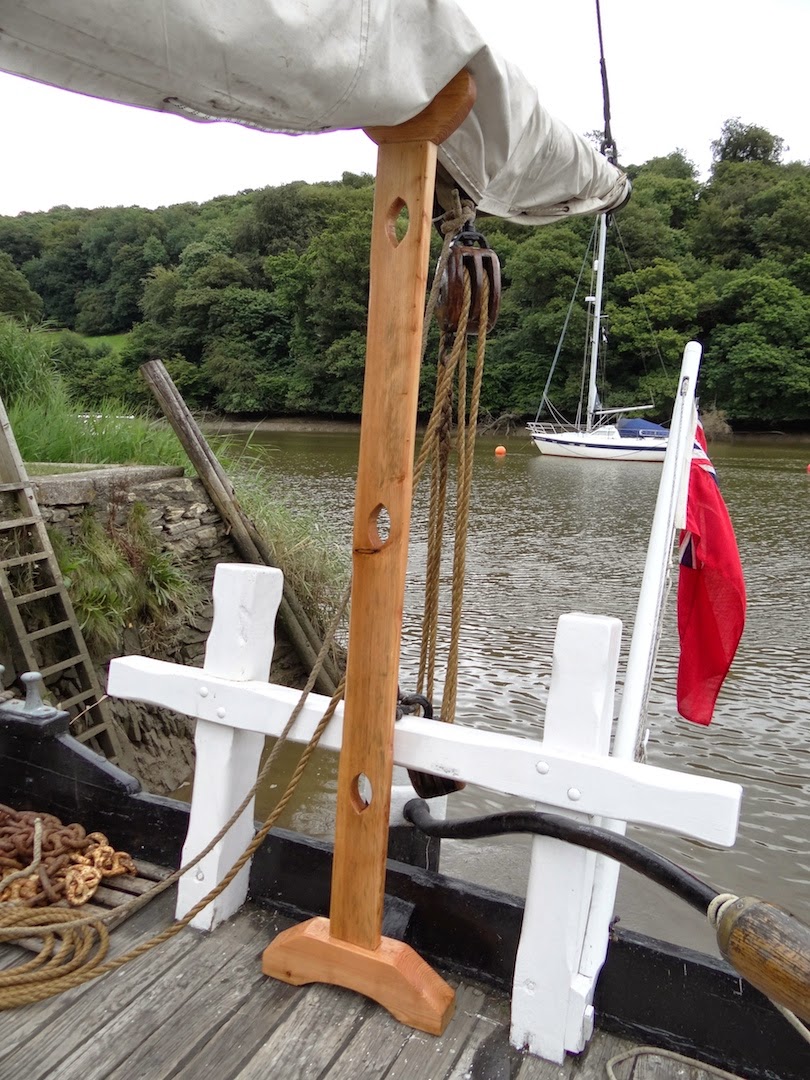 As the old scissor crutch was made using original Shamrock timbers, removed during the restoration, a decision is now needed as to how these old timbers can be used to raise funds for Shamrock. 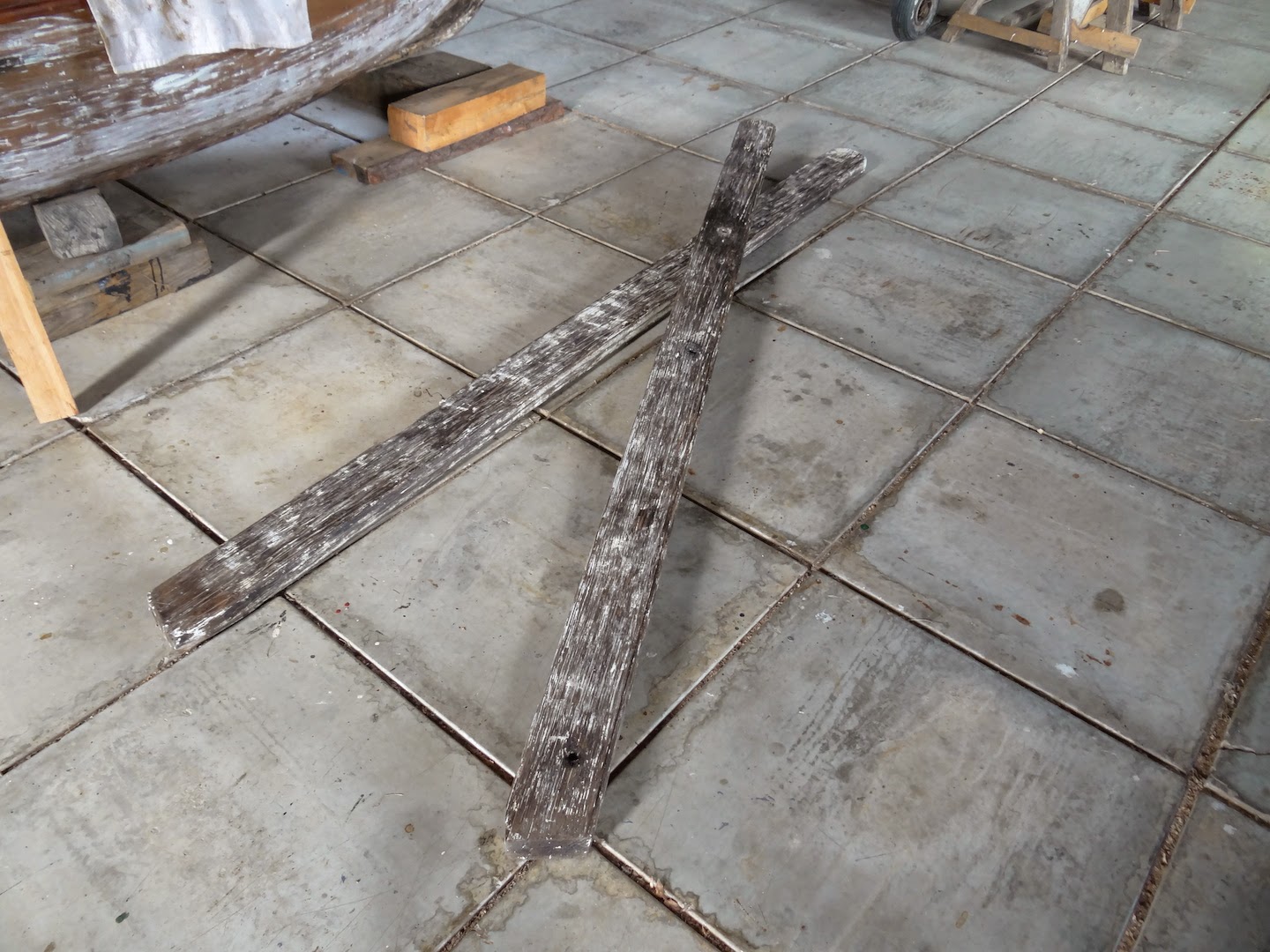 Secondly when a complete, rather old and tatty barrel was gifted to Shamrock the obvious thing to do with it was to turn it an donations barrel to compliment the existing successful water pitcher type donations barrel. 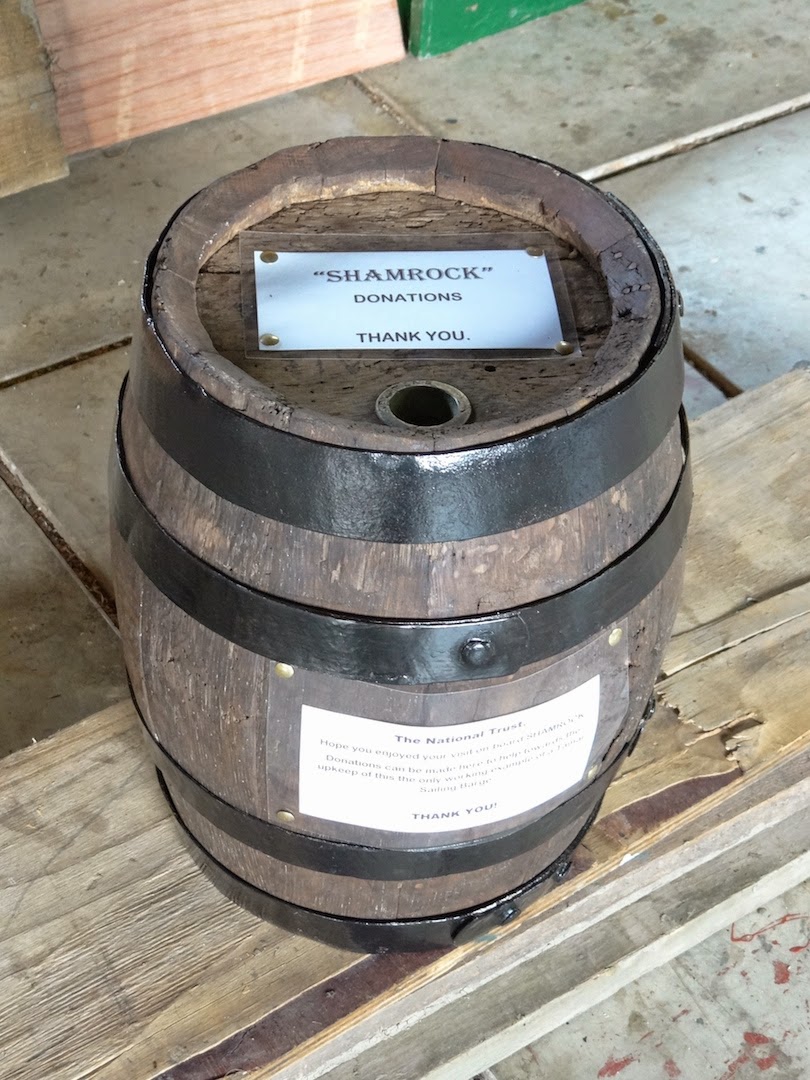 One often unplanned job is the removal of mud splatters from Shamrock. Some of these are caused by heavy rain while she is sat on the mud but the worst ones are caused by visitors throwing stones or other objects in the dock deliberately splashing Shamrock! Some people have no respect for an old lady.

Posted by Shamrocks Crew at 18:40 No comments: