To enable easy access to Shamrock's hold the 22ft (6.7m) long by 11ft (3.3m) cargo hatch is sub-divided into nine sections starting with two 'drop in' beams with there ends resting in wooden shoe cleats bolted into the hatch coamings. The beams and head ledges are fitted with similar shoe cleats for the the six fore and aft timbers which fit between the hatch beams. Each of these six timbers, along with the side hatch combings have rebates in their upper faces for the edges of the hatch-covers. Each of the twenty seven individual hatch boards are a slightly different size and are marked with their positions to save time when refitting them. Visitors to Shamrock are advised that the easiest way to view below deck is via the ladder located under the forward starboard corner hatch board, little do they realise that when she was a working boat there would have been no ladder. Access to the hold was achieved via the forward or after cabins. 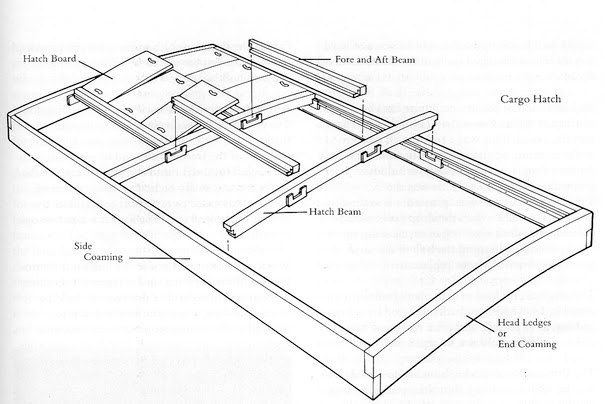 Posted by Shamrocks Crew at 12:09 No comments:

Shamrock's wrought-iron hanging knees support the main beams that carry the forward and after end of the cargo hatch coaming. They are also used on the smaller sections of beam that support the side coamings along with the deck planks that run between the hull and cargo hatch. As these knees have become corroded the crew has started on the task of stripping off the old paint and corrosion followed with a coat of fresh paint.

Shamrock's Staysail has been aired off and stowed away for the winter. 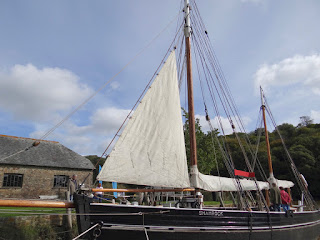 Visiting steam Launch Halcyon used Cotehele Quays slipway for launching and recovery during a recent river trip.  A certain member of the crew was getting quite nostalgic when the smell of burning coal mixed with steam wafted over the quay. 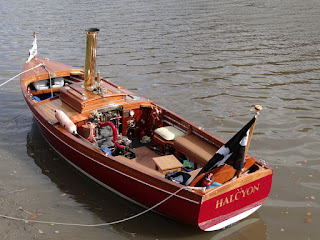 Posted by Shamrocks Crew at 21:47 No comments:

While Shamrock has been bathing in the autumn sun the fire pump has once again been put into service clearing her slipway of a few months accumulation of mud, visitors where warned to stand clear as hoses have been known to end up pointing in the wrong direction. The boat shed is also being tided up and a space cleared ready to house Nancy Belle for the winter. She needs a few broken ribs replaced and a good coat of paint before next spring.

Little Charly's mast has now been returned to her as it had been stowed in the boat shed while she was away on her European waterways tour, something about it being to tall for the bridges. 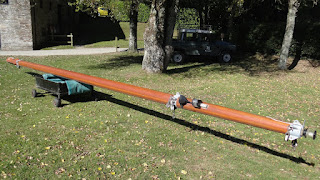 Posted by Shamrocks Crew at 20:31 No comments: