Thanks to Marina Dewing for this account of Shamrock's eventful voyage from Falmouth to Plymouth in 1966.

The return of the Shamrock to Plymouth

My story begins in 1962 when, after forty-three years working in the stone trade, the Shamrock was converted to a twin screw salvage and prospecting vessel. Equipped with two 65ihp diesel engines she sailed effortlessly into her new role. Shamrock's sturdy build and spacious hold provided a perfect base for divers, with room for equipment and the strength to carry weighty salvage recovered from wrecks. For the succeeding four years she became a familiar sight around the Cornish coast, particularly between Land's End and Falmouth where her classic lines were evocative of a bygone age.

Time, however, takes its toll on working craft and the Shamrock was no exception. The long years spent in the stone trade were compounded by a lack of maintenance in recent, years. Unlike a cherished pleasure craft, she had been worked hard and had given a lifetime of service. Ultimately she would be sent to the scrapyard after coming to the end of her useful life or becoming too expensive to repair.

Penryn lies at the head of a creek in Falmouth harbour and it was here that Shamrock was moored after a particularly hazardous salvage operation. Taking water and listing badly, she had limped into port after being overloaded with large artefacts recovered from a wreck. The excess weight had almost taken her to the bottom of the sea, and for the Shamrock it was the beginning of an amazing and incredible run of good luck.

The Falmouth harbour-master was responsible for all vessels entering and leaving the port and he immediately had Shamrock detained, considering her to be unseaworthy. Of no further use to her owners, she was then acquired by Fred Easton who was already well acquainted with her as he had been one of the crew on many diving expeditions. Fred intended to sail her back to Hooe Lake, in Plymouth harbour, where he could live on board and provide a support vessel for divers in Plymouth Sound.

The harbour-master's ruling was unequivocal: the Shamrock was detained and could only leave the harbour under tow, she was not fit to put to sea under her own engine power. Open hatchways had to be covered satisfactorily, and the weather must be clement. In order to fulfil these stipulations, Fred arranged for an ex-naval cutter from Plymouth to undertake the operation the following weekend. He covered the 22' x 11’ hatchway with planks and a tarpaulin and prepared for the voyage.

The weekend came and brought with it unrelenting gales and high seas. It was another week before the trip became possible and both vessels made ready to leave Penryn, finally motoring out of Falmouth on the Saturday afternoon hotly pursued by a customs launch! Using a loud hailer, the customs officer demanded to know why the Shamrock was using her own engines when she should be under tow. The reply that the two vessels were clearing the harbour as quickly as possible seemed reassuring and the launch sped off. That deception was the beginning of a long and hazardous journey.

From Zone Point to Dodman Point they made good headway, although Fred remembers thinking that there was more swell than he expected. The cutter, with its single engine, was the slower boat but there was still hours of daylight left - plenty of time to reach Plymouth before nightfall. The Shamrock had no lights, radio or compass but with the coastline clearly visible and the cutter in attendance those omissions were hardly considered a disadvantage.

After rounding Dodman Point, Fred noticed the sea getting choppier as the wind picked up. Both boats were dancing on sheets of moving water, with spray starting to foam over the bows. There had been no bad weather forecast or they would not have been allowed out of Falmouth, so neither skipper was expecting trouble. For hours they struggled on, engines pounding as the peaks of waves grew ever higher and the troughs deeper, and there was still a long way to go. It was now obvious that the heavy weather was slowing progress considerably. The clusters of cottages perched high on the Cornish cliffs were no longer disappearing behind the stern quarter, but seemed to hover within view for an age. They were running into deep trouble.

The two men were facing very different difficulties. The cutter sported a small wheel-house, offering a degree of shelter, but was single engined. Shamrock, however, was fitted with two powerful diesel engines. Fred's main problem was the fact that he was operating a hand tiller at the stern of the boat and was fully exposed to the elements. To make matters worse, the centre sections of bulwark had been removed when the Shamrock was converted, leaving the deck open to breaking seas. Already awash, the deck planking was now letting water into the hold and several cans of spare fuel had been washed overboard.

Eventually the familiar outline of Rame Head was visible ahead. To round the headland they would need to head out to sea, avoiding treacherous rocks, before turning into the safety of Plymouth Sound. It became a race against time, one which they couldn't win as the Shamrock’s hold was rapidly filling with water, slowing progress even more. The cutter stopped in Whitsand Bay to use a hand pump, reducing the bilge water as much as strength would allow. Fred, already wet through, cold and tired, realised that the single hand pump on board would make no difference to the amount slopping around in the hold.

Before reaching Rame, darkness fell. The two men sailed into their worst nightmare. Fred had no option, he simply followed the lights of the cutter as it headed out to sea, making for the Eddystone lighthouse. It was the only thing visible in the darkness and hopefully they could got their bearings from it, clear Penlee Point and make it safely back into the Sound. Grimly aware that they were between the Devil and the deep blue sea, they ploughed on.

Suddenly, the cutter appeared to be turning as the port and starboard lights were rotating. It was not so easy to turn the Shamrock, the water in the hold was acting as ballast and she wasn't responsive to the tiller in the swelling seas and battering waves. By the time he completed the manoeuvre Fred realised that the cutter was nowhere to be seen. He and the Shamrock were alone in the darkness.

Trusting his instincts and his faith in the Shamrock, Fred kept going in what he considered to be the right direction until he saw the white curve of surf breaking against rocks in Whitsand Bay. With a feeling of utter relief, he knew exactly what he was going to do. Even in inky blackness the dangerous power of waves dashing against rocks was visible, giving him the map he needed, a silhouette of shoreline. Edging in towards the protective curve of land he slowed the engines then put them, in neutral before lurching to Shamrock's bow and dropping anchor, The barge seemed to stabilise and settle, so he cut the engines and made for the foc'sle, where there were two bunks. Only stopping to remove his waders, which had filled with water, he lay on one of the bunks and submitted to exhaustion.

A throbbing engine and someone shouting woke Fred to a grey dawn. Shamrock was wallowing but the noise of the storm had abated. Without bothering to don his waders Fred hauled himself up the companionway ladder to the deck, where he saw a fishing boat bobbing around at a respectful distance. A shouted communication through cupped hands established that it had come from nearby Seaton. At first light they had spotted the Shamrock dragging her anchor, slowly edging towards the turbulent water around the rocky shoreline. Horrified by the impending disaster Fred shouted his thanks as he ran to start the engines. Only able to start one he desperately dashed to the bow end where he had to lift the anchor chain, hauling it in hand over hand. It was a difficult task without a windlass, but the danger he was in gave him extra strength. Standing at the tiller in fragile daylight and finally - heading for home on only one engine he suddenly realised that he was still barefooted.
As the tension drained away, hunger took over. Lashing the tiller, he put some water on the stove and boiled two eggs which was the only food on board. Later that morning Shamrock entered Plymouth Sound with great dignity, mooring in Sutton Harbour. It was only later, when she was safely berthed in Hooe Lake that the fuel finally ran out! The cutter had sailed back earlier after recognising lights at Penlee Point in the dark.

Fred successfully employed the Shamrock as a diving tender in the Plymouth area for several years until she was beached, and finally rescued and restored.

So far Shamrock has survived the winter storms with only minor chaffing of one of her mooring ropes, resulting in the loss of some of her hull paint. The offending rope has been repositioned.

Storm Imogen did manage to lift the workboat ‘Edgcumbe’ off her support wedges on the boat shed slipway and move her onto the grass at the side of the slipway. Luckily her bow was secured to the boat shed and she did stay upright.

At present the crew spends most of their time in the boat shed close to the log burner. They have not exactly been idle though, much time has been spent in the preparation of the rigging of Shamrock, her anchor and rigging blocks have now been painted and varnished as required. Also a new hold guardrail is being manufactured as the old one was found to be rotten and has been consigned to the log burner. 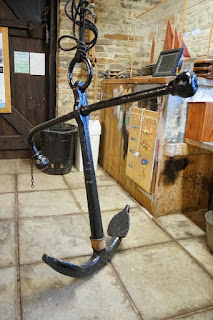 Nancy Belle's refit continues with her wooden centre seat knees being replaced with phosphor bronze knees, new deck boards have been completed and are in the process of being painted. Side bench seats have been roughed out and lines checked, the after bench seat sections causing the most problems as there is a 3 inch (8 cm) curve towards the stern. This meant that to end up with an 11 inch (28 cm) wide seat along its full length,15 inch (38 cm) wide planks have had to be used.


Posted by Shamrocks Crew at 20:36 No comments: